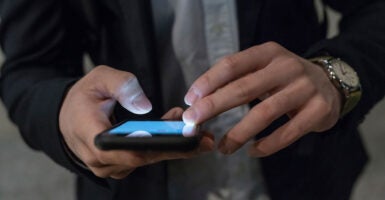 The pastor of the Church of the Highlands in Birmingham, Alabama, liked a few tweets by the conservative Turning Point USA and its founder, Charlie Kirk. For that, Birmingham officials cut all ties with the church. (Photo: Garage Island Crew/Getty Images)

Seventy-seven years ago, U.S. Supreme Court Justice Robert Jackson wrote, “If there is any fixed star in our constitutional constellation, it is that no official, high or petty, can prescribe what shall be orthodox in politics, nationalism, religion, or other matters of opinion or force citizens to confess by word or act their faith therein.”

Essentially, Americans don’t want government officials telling us what to believe or what to say, and we certainly don’t want them retaliating against us simply for believing or saying something they disagree with. In fact, our Constitution prohibits it.

But officials in Birmingham, Alabama, seemingly did just that several weeks ago.

The Housing Authority Birmingham Division ended its partnership with a health clinic sponsored by the Church of the Highlands, Alabama’s largest church, which had been providing services in Birmingham’s public housing communities on June 6.

According to previous reporting by AL.com, “The Church of the Highlands … provided free mentoring, community support groups and faith, health, and social service activities at the Housing Authority of Birmingham Division’s nine public housing communities. The church did not receive any money for the services, but had an agreement to allow its volunteers at the facilities.”

The next day, the Birmingham Board of Education canceled its leases for the Church of the Highlands to use local high schools for worship services.

So, what terrible thing happened that was so bad, so outrageous, so beyond the pale that school officials ended leases worth hundreds of thousands of dollars, told a church and its parishioners they were no longer welcome in its facilities, and caused the housing authority to explicitly reject free services and medical care for its neediest residents—even the free COVID-19 testing the church-sponsored health care group had been providing?

The pastor of the church, Chris Hodges, liked a few tweets from Turning Point USA and its founder, Charlie Kirk.

The “liked” tweets are far from the most incendiary floating around the Twitterverse. But really, that’s beside the point.

Government officials took adverse actions against a church and its parishioners because those officials disagreed with “speech” by its pastor. (Yes, a “like” on Twitter can count as speech for First Amendment purposes.)

The Housing Authority Birmingham Division commissioners explicitly stated they were kicking out the pastor and his parishioners because they disagreed with his purported views.

They said, “Commissioners agreed that Pastor Hodges’ views do not reflect those of [the Housing Authority Birmingham Division] and its residents, and Hodges’ values are not in line with those of [our] residents. [We] and Campus of Hope staff [a housing authority organization] will continue to work with other faith-based organizations in the community to identify resources that will replace the services that were provided by [the Church of the Highlands].”

First of all, consider the hubris. These officials purport to speak for each and every resident living within their communities.

Second, they are punishing entities and individuals other than the pastor who “spoke” and who themselves may disagree with the pastor liking these political posts. What possible justification could there be for this?

Regardless, this isn’t Soviet Russia or communist China. Citizens in a free society are allowed to discuss, debate, and disagree on a broad array of issues—and that includes disagreeing with government officials.

Hypothetically, does anyone really think it would be OK if these same officials punished the pastor because they disagreed with the pastor’s statements that black lives matter or that George Floyd’s death was a senseless tragedy?

No, of course not, because it would be unconstitutional retaliation and viewpoint discrimination.

So, what’s to be done about it?

A lawsuit is always an option. If I were the insurer or risk manager for either of these Birmingham entities, I’d be reaching for the Rolaids right now and getting ready to ask what it would take to settle the case.

But this route seems unlikely, mostly because of the statements the pastor made in the face of these circumstances. He’s shown contrition at having caused offense to anyone and reemphasized his goal of ministering to people of all colors and ethnicities in all walks of life. He even thanked both the school board and the housing authority for providing the opportunity to work with them and pledged to continue supporting both.

From a theological perspective, this may be the right approach. From a flesh-and-bone-need-for-good-governance perspective, the precedent set by these officials is dangerous and must be addressed.

They haven’t hesitated to speak out against potentially unconstitutional infringements and have written to state and local officials expressing their concerns and threatening to take action.

This seems to be a case that, at a minimum, deserves a close look by the Justice Department.

Similarly, Alabama Attorney General Steve Marshall would do well to look into this attack on his own community of faith. (According to his website, he and his family attend Church of the Highlands in Montgomery, Alabama.) Are there really no Alabama laws that would prohibit this kind of retaliation?

Most importantly, though, we as citizens must make clear to our elected and appointed officials that they are not the final arbiters of acceptable thought in our country. Unpopular, controversial, or even offensive speech is protected. And we must take pains to keep it that way.

After all, who’s to say that while we’re railing against those kinds of speech today, our own won’t be targeted on those grounds tomorrow?