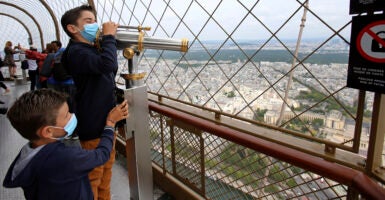 Children check out the view Wednesday as the top floor of the Eiffel Tower in Paris reopens after three months during the coronavirus pandemic. (Photo: Chesnot/Getty Images)

Cases of COVID-19 are spiking in U.S. states in the South and West at a time when initially hard-hit Europe is seeing a decline in coronavirus cases and a seeming return to normal.

Most European countries have reopened schools as well as retail stores, restaurants, and bars at roughly the same time as about half of U.S. states grapple with a surge in COVID-19.

Here are four things to know about the coronavirus disparity between the United States and European countries.

From March 15 through June 27, the United States outpaced every European country except Sweden in new COVID-19 cases, according to The Heritage Foundation.

Sweden is famously the country that didn’t push a nationwide lockdown and instead relied on herd immunity.

“There is a clear gap between Europe and the U.S. The U.S. never got a handle on the spread and never suppressed it,” Joshua Michaud, associate director for global health policy at the Kaiser Family Foundation, told The Daily Signal.

“Now we are seeing a surge of cases in the South and West. Hospitalizations are on the uptick and [so are] deaths,” Michaud said. “Europe has maintained the suppression over time.”

About half of the new cases in the United States in recent weeks have been in four states: Arizona, California, Florida, and Texas.

The U.S. led all but three other countries in new COVID-19 cases as of Wednesday, according to Worldometer, behind India, Mexico, and Russia. Just days earlier, the U.S. led the world in new cases.

Spain and Italy, initially two of the hardest-hit countries in the world, had zero new reported cases Wednesday. The United Kingdom also had zero new cases, according to Worldometer.

Interestingly, the same was true for Sweden.

The United States had the highest number of active cases in the world as of Wednesday, followed by Brazil, India, Russia, and South Africa, according to Worldometer. Among European countries, France ranked 11 for active cases, Portugal 33, Italy 34, Turkey 35, and Romania 38.

“The Europeans scaled up public health surveillance,” Michaud told The Daily Signal. “The U.S. scaled up testing as well, but couldn’t catch up with levels as they grew.”

The United States also leads the world in total confirmed cases since the COVID-19 pandemic began, according to Worldometer. Brazil, India, Russia, and Peru follow, in that order.

From March 15 through June 27, the United States joined most other countries in seeing a significant decline in death rates, according to The Heritage Foundation’s data.

“The death rates in European countries, particularly in Italy and Spain, came after the massive outbreaks there,” Kaiser Family Foundation’s Michaud said.

The United States has had fewer deaths per 100,000 in population than the United Kingdom, Spain, Italy, and France, The Wall Street Journal reported.

Some of the worst hot spots in the U.S.—Arizona, Florida, and Texas—each have death rates well below the European average, according to the Journal.

Italy, after peaking in March, had the steepest plummet in the death rate. Sweden saw a decline after a peak in late April, according to the March-through-June numbers.

As of Wednesday, the United States had the fourth-highest rate of new deaths from COVID-19, behind Mexico, India, and Iran, according to Real Clear Politics’ coronavirus tracker.

Over the course of the pandemic, the Real Clear Politics numbers show that the United States has the seventh-highest deaths per 1 million residents.

Leading in deaths per million is Belgium, followed by the United Kingdom, Spain, Italy, Sweden, and France.

However, the United States has led the world in the raw number of COVID-19 deaths, according to the Real Clear Politics tracker.

Russia came in fifth and was the European country with the most recent deaths. Next in Europe was Romania at 14, followed by Ukraine at 17, Serbia at 19, Bosnia-Herzegovina at 22, Portugal at 25, and Poland at 29.

Other European countries that initially were hard hit, including the U.K., Spain, and Italy, showed zero new deaths as of Wednesday.

France had the highest rate of confirmed COVID-19 fatalities over the duration of the pandemic so far, according to the Real Clear Politics tracker. Belgium, Italy, the U.K., and Hungary rounded out the top five.

Comparing a larger country such as the U.S. with a large continent made up of smaller countries is difficult, said Nile Gardiner, director of The Heritage Foundation’s Margaret Thatcher Center for Freedom.

These border restrictions were a near unprecedented move since the advent of the European Union, he said.

The situation in the U.S. is much more challenging,” Gardiner said.

“The U.S. is a union of 50 states, while Europe is a collection of nation-states. It’s an apples-to-oranges comparison,” he said.

The United States never had as strict a lockdown as in most European countries, with the major exception of Sweden, Michaud said.

“Europe’s lockdowns were much more stringent than the U.S.

The reopenings were more strategic and staged,” Michaud told The Daily Signal. “Reopening bars and gyms and a lot of environments known for being where transmission occurs was a recipe for greater case numbers.”

Reopenings can work if done properly, he added.

“Most states [in the U.S.] were locked down at a time when only some states were disproportionately affected,” Michaud said. “If reopenings are done more carefully and stringently, it can be done safely.”

“Europe also opened schools without a great level of infection rates,” Gardiner said. “That was a perfectly reasonable policy for European countries. The reopening of European countries took place when [COVID-19] rates were already flatlining after the overall rate of infection had been falling for several weeks.”

Some of the U.S. states that are now hot spots reopened their economies about the same time as other European countries, The Wall Street Journal noted.

France reopened shops and schools May 11, then opened bars, restaurants, and cafes June 2. Germany started reopening retail stores April 20, then followed with bars and restaurants May 15.

Italy, one of the most dangerous spots early on, opened up shops, bars, and restaurants May 18.

Florida allowed restaurants and stores to reopen May 4 at 25% capacity and increased that to 50% May 15. On June 5, Florida allowed bars to open at 50% capacity—with the exception of the high-infection jurisdictions of Broward, Miami-Dade, and Palm Beach counties, where there have been more cases.

Arizona let restaurants and stores open May 11 if they followed the social distancing and hygiene protocols recommended by the Centers for Disease Control and Prevention.