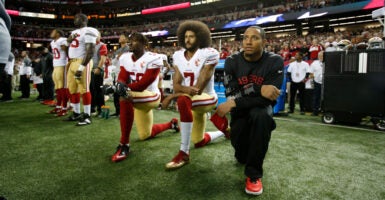 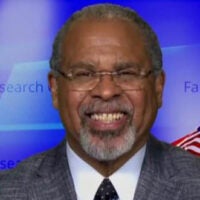 Ken Blackwell is the former mayor of Cincinnati and former U.S. ambassador to the U.N. Commission on Human Rights.

The National Football League once again is fumbling away an opportunity to unite America. This is the result we could have expected, given the NFL’s playbook over the past few years.

The NFL’s decision to play what is known as the black national anthem—“Lift Every Voice and Sing”—before every Week 1 game beginning Sept. 10 seems poised to divide, not unite, our country.

But a secondary, more certain outcome of this decision is that the NFL will lose its luster at a greater pace than it achieved its dominant allure.

Football once reigned supreme in American culture. The sport wove its way into American homes all but two nights a week, catapulting up the ratings charts. To the unending benefit of the NFL—and its teams and players—football replaced baseball as America’s game.

Is our new national pastime now telling us we’re not one nation?

The league’s response to our current, divisive moment was amplified by the contrast offered from a former player. Marcellus Wiley said something very different, and so much more profound, that it deserves air time in every home.

Appearing on the “Speak for Yourself” show on Fox Sports 1, Wiley said he didn’t support the recent proposal to paint the words “Black Lives Matter” on the floor of NBA basketball courts. He cited the anti-family mission of the Black Lives Matter organization and the fact that painting those words would play into the identity politics that are dividing the nation.

In Wiley’s own words:

We know what identity politics does—it divides, and it polarizes. No matter how you want to look at it, that’s just the effect of it no matter how great the intentions are. We all know the road to hell is paved with good intentions.

Everyone should hear Wiley’s words and the passion in his voice. His point was clear: It doesn’t qualify as a national conversation—it doesn’t bring people together—if everyone who doesn’t say the exact words prescribed by the mob is intimidated and disqualified.

You may know the story of coaches who folded a $100 bill into an NFL playbook to see if a player cared enough to study. Well, Wiley was the only one who got the Benjamin (if we can still say that).

Similarly, he took the time to read and scrutinize the Black Lives Matter manifesto and was rightly concerned that its mission extended way beyond racial equality and into disruption of the family. It’s an agenda not in pursuit of tolerance for all, but with spiteful contempt for the best guarantor of success.

Who would have thought that the most important message amid this divisive moment would air on Fox Sports 1? It came not from a politician, activist, or anarchist, but from an athlete.

By stating his stance, Wiley has proven that he has more courage than NFL Commissioner Roger Goodell, the entire U.S. Senate, and the Screen Actors Guild. After all, it isn’t rebellious to be white and say, “Black lives matter.” It’s positively heroic to be black and say, “Pump the brakes.”

This revelation won’t get Wiley on a short list to star in a Nike ad. But it will make him a hero in his own home, a voice for families in every community, and a guiding light for the majority of Americans.

Since Wiley’s conversation, the NBA has announced that a vast majority of players will wear jerseys with moment-defining words and phrases, such as “Equality” and “Vote,” instead of their names.

These amazing basketball players also have a responsibility to do their homework. Sports play an integral role in society, maybe more so here than in other countries. While local bonds are often strongest, the appeal of national teams and individuals transcends societal boundaries as well as geographic ones.

The root attraction might be obvious: A level playing field like no other—where men and women and girls and boys can prove their mettle competing with the same set of rules—and anyone can emerge victorious. Parades are held for the winners who achieve the greatest triumphs, and adulation and respect are given even to those in defeat and loss.

Sports emphasize individualism and teamwork, sacrifice and achievement, and outcomes as much as process. Our culture anoints those who navigate this well as leaders.

It’s that leadership that is sorely missing today. The dominant formation in the NFL playbook is one of submission.

We can learn a lot by reviewing the fallout of the August 2016 preseason game when Colin Kaepernick sat on the bench during the national anthem. It’s as if the San Francisco 49ers organization, then head coach Chip Kelly, and the NFL haven’t learned anything.

Kaepernick said: “I am not going to stand up to show pride in a flag for a country that oppresses black people and people of color. To me, this is bigger than football and it would be selfish on my part to look the other way.”

Kelly embraced Kaepernick’s decision as “his right as a citizen” and said, “[I]t’s not my right to tell him not to do something.”

The 49ers issued a statement saying: “The national anthem is and always will be a special part of the pre-game ceremony. It is an opportunity to honor our country and reflect on the great liberties we are afforded as its citizens. In respecting such American principles as freedom of religion and freedom of expression, we recognize the right of an individual to choose and participate, or not, in our celebration of the national anthem.”

A mea culpa here and an acquiescence there didn’t satisfy fans, critics, or the public. The kumbaya huddle still eluded them. So the commissioner’s office doubled down and invited in Democrat press flack to save the day.

Yet those who persist in amplifying division could never help the NFL transcend the moment. Those who are happy to force capitulation for political ends ensured that the only outcome for the league was failure.

When captains don’t lead and leaders capitulate, the result is chaos—and that’s where the NFL finds itself. Rather than building on and elevating its role in American society as a force for legitimate civic conversation, it panders.

Still, as our sports prove about this great country of ours, the land of opportunity extends well past the back of the end zone. It’s each of us, the people, who must pick up the pieces and stand for truth.

Here lies the chance for every NFL player, coach, employee, and fan to demonstrate leadership in the way that it is lacking from the commissioner’s office.

Read the history of the poem “Lift Every Voice and Sing,” first performed by schoolchildren in celebration of President Abraham Lincoln’s birthday in 1900. The poem honors a man who gave his life to ensure a nation conceived in liberty—dedicated to the proposition that all men are created equal—remained a nation of liberty. Lincoln sustained the United States as the standard of liberty for all the world.

Read the words that became the song. It’s about every voice and the harmony of liberty.