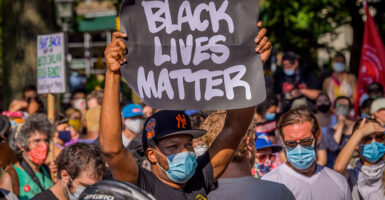 He then proceeded to browbeat Crews, who had committed the great sin of tweeting, “#ALLBLACKLIVESMATTER 9 black CHILDREN killed by violence in Chicago since June 20, 2020.” Lemon specifically objected to Crews’ hashtag.

This, of course, is largely false. The Black Lives Matter movement did indeed begin with protests about police brutality but quickly morphed into broader debates over the validity of looting and rioting, tearing down historic statues, slavery reparations, and defunding the police.

And Black Lives Matter, as Crews correctly pointed out, has never restricted its mandate to the question of police violence: It has announced that its focuses also include police brutality, transgender rights, gay rights, disrupting the nuclear family, and freeing Palestine, among other diverse topics.

So why is Lemon so deeply invested in preventing conversations about black lives? Why, in fact, do only some black lives matter, rather than all?

That’s not merely a question asked by conservatives or contrarians. It’s being asked all over the United States by black Americans being left to the predations of criminals, in large part thanks to the woke virtue signaling of many Black Lives Matter leaders and media allies.

One month later, 11-year-old Davon McNeal was shot in the head while heading to a family cookout on July 4. His grandfather, John Ayala, lamented: “We’re protesting for months, for weeks, saying, ‘Black Lives Matter. Black Lives Matter.’ Black lives matter it seems like only when a police officer shoots a black person. What about all the black-on-black crime that’s happening in the community?”

McNeal was just one of the latest victims of a wave of violence gripping America’s major cities.

Last weekend, at least 89 people were shot in Chicago, leaving at least 17 dead. Shootings in Philadelphia have spiked 67%. In the first week of June, Los Angeles saw a shocking 250% increase in murders from the prior week. New York City’s shootings have skyrocketed 44% over last year’s numbers; every person shot there the week of June 29—101—was from a minority community.

It turns out that the agenda of Black Lives Matter, which includes fighting against the prevalence of police—a call taken up by Democratic mayors and city councils around the United States—endangers black lives far more than the presence of police.

Yet these lives don’t particularly matter for Black Lives Matter advocates, apparently. Black lives matter when we’re talking about police brutality. But Lemon has no airtime each night for those who seek to talk about threats to black lives that dwarf in severity problems related to policing—and that are just as newsworthy.

Indeed, the statistical case is unassailable that the daily murder of minority youths in America’s major cities is far more newsworthy than the latest cable panel discussion of “white fragility” or the “power of whiteness.”

But our current Black Lives Matter moment isn’t about Davon McNeal, even if the wages of Black Lives Matter’s recommended policies are death for those left unprotected by law enforcement. All that matters for too many in our elite institutions is the narrative that America’s systems are the greatest obstacle to black Americans. And not all lives lost are equally valuable in promoting that perverse narrative.