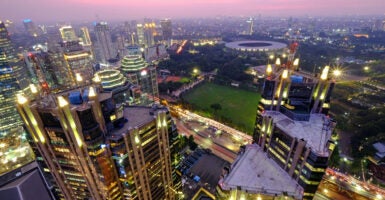 Indonesia is a rising powerhouse that has undertaken wide-ranging reforms to improve competitiveness. Pictured: The skyline of Jakarta, the capital city of Indonesia. (Photo: Ali Trisno Pranoto/Getty Images)

Economic freedom has been growing markedly in Indonesia, one of America’s important partners in the Indo-Pacific region.

The country’s rating in The Heritage Foundation’s annual Index of Economic Freedom has surged by almost 10 points over the past six years, from 58.1 to 67.2 on the index’s 100-point scale. Climbing steadily higher in the ranks of the “moderately free,” the Indonesian economy has expanded sharply, too.

In recent years, the dynamic, populous archipelago nation has undertaken wide-ranging reforms to address various structural weaknesses in its economy and to improve competitiveness.  Indonesia often is mentioned as one of Asia’s next powerhouse economies, but it might be fairer to say the nation already has achieved that status.

Indonesia’s economy is now roughly the size of Brazil’s, and is half again larger than the economy of South Korea.

The Indonesian economy has shown considerable resilience. Weathering the global economic uncertainty relatively well, Indonesia has achieved annual growth rates averaging around 5% over the past five years. The country continues to be an attractive investment destination, with its abundant natural resources and well-educated young population.

Recent reform measures have put greater emphasis on improving regulatory efficiency, enhancing regional competitiveness, and creating a more vibrant private sector through decentralization. Public finances have been relatively well managed, and debt has been kept under control at under 35% of gross domestic product.

Despite new economic challenges stemming from the ongoing coronavirus pandemic, Indonesia is well positioned to utilize its hard-earned economic freedom to mitigate the immediate fallout from the pandemic. Its already high growth potential can expand even more, however, if it sets as a goal the further expansion of economic freedom.

As a start, Indonesia should aim to move even higher into the “mostly free” category. A good first step would be to implement reforms that address the additional deficiencies that are reflected in the country’s still-low scores for judicial effectiveness and government integrity.

As noted by the index, lingering inefficiency in the country’s legal and investment regimes hampers investors’ confidence and undermines entrepreneurship growth. A lack of transparency and a weak judicial system add uncertainty and risk, particularly to new economic endeavors.

For Indonesia to reach new economic development heights, deepening pro-market economic reform will be more essential than ever.

President Joko Widodo, now in his second term, and his administration have been presented with a must-not-miss opportunity to continue to build on a solid foundation for the nation’s future development. The way he can do this is through greater commitment to institutional and structural economic reform.

Reopening the post-pandemic economy with a renewed commitment to the pillars of economic freedom—transparency, accountability, openness, and efficiency—will help the largest economy in the Association of Southeast Asian Nations group fortify its political and economic stability, and assure Indonesia’s status as an emerging economic powerhouse in the Indo-Pacific region.

The time for Indonesia to act on that economic pathway is now.