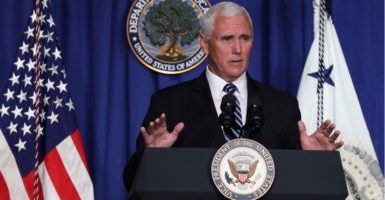 "We can’t let our kids get behind academically," Vice President Mike Pence says Wednesday during a press briefing by the White House coronavirus task force at the Department of Education. (Photo: Alex Wong/Getty Images)

Some school districts were successful in distance learning during the spring COVID-19 outbreak, Education Secretary Betsy DeVos said Wednesday, but far too many were disappointments and “just gave up.”

“Things like this cannot happen again in the fall. It would fail America’s students. It would fail taxpayers who pay high taxes for their education,” DeVos said during a press conference held by the White House coronavirus task force. “Ultimately, it’s not a matter of if schools should reopen. It’s simply a matter of how.”

Vice President Mike Pence, head of the task force, conducted the press conference at the Department of Education. It also included top public health officials, but President Donald Trump did not attend.

However, Trump addressed the matter during a Rose Garden event later Wednesday at the White House.

During the earlier press conference at her department, DeVos acknowledged risks are involved in reopening schools, but added that “lost opportunities for students, particularly the most vulnerable among us” are also a risk, particularly for students with disabilities.

“It will look different depending on where you are,” DeVos said, referring to some states with a larger surge in COVID-19 cases than others. “What’s clear is that students and families need more options.”

She singled out Fairfax County, Virginia, a wealthy suburb of the District of Columbia where many federal workers live, as having what she called an “elite public school system” that had a disastrous performance.

“I talked to all of the state schools chiefs at least once, most of them more than once,” DeVos said. “They have told me that while many of the districts in their states have done well through the past several months, a number of them they were very disappointed in doing next to nothing.”

Health and Human Services Secretary Alex Azar said that different measures could be taken to ensure safety, such as keeping students in one classroom rather than having them switch classes.

Earlier Wednesday, Trump tweeted that in “Germany, Denmark, Norway, Sweden and many other countries, SCHOOLS ARE OPEN WITH NO PROBLEMS.” He added: “May cut off funding if not open!”

The Education Department is “seriously considering” using federal funds as an incentive for schools to reopen, DeVos said in an interview Tuesday night on Fox News Channel.

During the press conference, Pence took a softer approach, noting that 90% of school funding comes at the state and local level. The Trump administration will work with states based on their circumstances, he added.

“What we heard again yesterday from education officials and what we heard from the American Academy of Pediatrics [is that] it’s absolutely essential that we get our kids back into the classroom for in-person learning,” Pence said, adding:

We can’t let our kids get behind academically. Remember that for children who have mental health issues, for special needs children, for nutrition, for children in communities facing persistent poverty, the school is the place where they receive all those services.

Trump also went after the federal government’s Centers for Disease Control and Prevention in a tweet.

“I disagree with @CDCgov on their very tough & expensive guidelines for opening schools,” Trump tweeted. “While they want them open, they are asking schools to do very impractical things. I will be meeting with them!!!”

Dr. Robert Redfield, CDC director, sought to explain the goal of the guidelines, which include strong social distancing recommendations for children in schools.

“The guidance that CDC continues to put out for schools K-12 and higher learning is intentional for reopening and keeping our schools open,” Redfield said.

Redfield said the CDC would issue clarifications to the guidelines next week.

“I want to make it very clear, what is not the intent of CDC’s guidelines is [for them] to be used as a rationale to keep schools closed,” he said. “We are prepared to work with each school, each jurisdiction to help them use the different strategies they proposed, and help do it safely, so they come up with the optimal strategies for those schools.”

Redfield later noted: “In general, this virus does not cause significant damage in children.”

“Unlike influenza,” he said, “we really don’t have evidence that children are driving the transmission cycle of this.”

However, during a Rose Garden event later Wednesday, Trump addressed the matter.