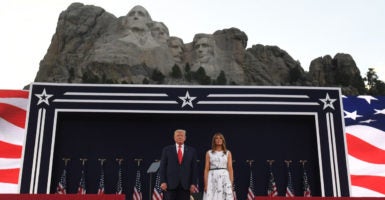 “The violent mayhem we have seen in our streets and cities that are run by liberal Democrats in every case is the predictable result of years of extreme indoctrination and bias in education, journalism, and other cultural institutions,” President Donald Trump said in his July 3 speech at Mount Rushmore. (Photo: Saul Loeb/AFP/Getty Images)

“The union of these four presidents carved on the face of the everlasting hills of South Dakota will constitute a distinctly national monument.”

So said President Calvin Coolidge in 1927 when he made a dedication of the newly begun project to carve the faces of George Washington, Thomas Jefferson, Abraham Lincoln, and Theodore Roosevelt into Mount Rushmore.

“It will be decidedly American in its conception, in its magnitude, in its meaning and altogether worthy of our country,” Coolidge said. “No one can look upon it understandingly without realizing that it is a picture of hope fulfilled … the people of the future will see history and art combined to portray the spirit of patriotism.”

Though Coolidge spoke those words more than 90 years ago, they could easily represent the widespread views of generations of Americans thereafter. That is, apparently, until 2020.

President Donald Trump’s speech delivered on the eve of Independence Day at the base of Mount Rushmore—in which he praised the men portrayed on it, defended American history, and denounced those who have gathered in mobs intent on tearing it down—echoed Coolidge’s sentiments.

However, America’s national media portrayed the speech as “dark,” “divisive,” and foreboding.

CNN’s Chris Cillizza noted 28 “outrageous lines” in Trump’s speech, which included words of thanks to first responders and praise of Lincoln for victory in the Civil War and his role in abolishing slavery.

Countless headlines repeated that Trump’s speech was about defending “Confederate monuments,” which were entirely unmentioned in his remarks.

Apparently, we’re supposed to ignore the destruction of statues ranging from Christopher Columbus to George Washington to Ulysses S. Grant, and now, even abolitionist Frederick Douglass.

The day before Trump’s speech, The New York Times ran an op-ed calling for ditching George Washington. A few days afterward, a piece by Lucian K. Truscott IV, a descendent of Thomas Jefferson—as though that really matters—calling for the removal of the Jefferson Memorial was published.

To say the war on our history is about the Confederacy and not the United States writ large is little more than gaslighting at this point.

The media’s dishonesty and hyperbole about Trump’s speech is certainly a sign of the times in which we live. After all, media hysterics are now so commonplace that it would be more shocking if our national media landscape didn’t fly into a tizzy after a major Trump speech.

It was not long ago that the idea of an American president or politician standing at the base of Mount Rushmore and praising the men whose faces adorn it would have been treated as entirely uncontroversial.

In fact, Sen. Bernie Sanders, I-Vt., did that just four years ago with no mention from the press that in doing so he was supposedly bolstering “white supremacy.”

The media’s reaction to a large extent represents perhaps the most important point Trump made in his speech.

A generation—generations, actually—of indoctrination by America’s most powerful cultural institutions have produced an American elite instinctively hostile to praise of America’s past, and a larger American population unmoored from any kind of understanding or perspective of what makes the United States unique, distinct, and great despite its many imperfections.

“The violent mayhem we have seen in our streets and cities that are run by liberal Democrats in every case is the predictable result of years of extreme indoctrination and bias in education, journalism, and other cultural institutions,” Trump said in his July 3 speech at Mount Rushmore.

“Against every law of society and nature, our children are taught in school to hate their own country and to believe that the men and women who built it weren’t heroes, but villains. The radical view of American history is a web of lies.”

In a sense, it was an addendum to President Ronald Reagan’s farewell address, in which he called for Americans to more fully commit themselves to developing and encouraging what he called “informed patriotism.”

Reagan said that a “new patriotism” had developed during his presidency as the country healed from the pain of the Vietnam War and the tumult of the 1960s and 1970s. But he warned that the victory would be short-lived if it came without an ongoing commitment to that informed patriotism.

“[A]re we doing a good enough job teaching our children what America is and what she represents in the long history of the world?” he asked.

Reagan worried that an “unambivalent” appreciation of America was increasingly seen as passe, and that the precious and exceptional aspects of what made America great were no longer being transmitted to the future generations.

Regrettably, over the past few decades, our institutions of culture went beyond just dismissing an unambivalent appreciation of America. Following the teachings of leftist historian Howard Zinn and other radicals, many young Americans have become steeped in the idea that America is exceptionally bad, built on nothing but exploitation and racism.

The Pulitzer Prize-winning 1619 Project of The New York Times clearly makes that case, but it isn’t treading new ground. It’s instead a capstone to a set of ideas already deeply entrenched in America’s elite cultural institutions.

And that’s what’s divisive and foreboding, not Trump’s speech, which represents a clarion call to draw the line and refuse to continue down this dark path.

No wonder the press, which has done so much to fan the flames of this cultural revolution, hated Trump’s speech and has sought to discredit it.