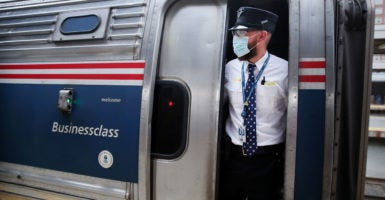 The Invest in America Act would increase subsidies for mass transit by up to 54% and for Amtrak by up to 200% or more. (Photo: Craig F. Walker/The Boston Globe/Getty Images)

Independence Day weekend, typically a festive time, saw many parades and parties canceled as a result of the ongoing COVID-19 pandemic.

In contrast, the House went into the holiday weekend doing what it loves most; namely, passing legislation to spend trillions of taxpayer dollars and further centralize power in Washington.

The bill in question, the Invest in America Act, is more than 2,300 pages long. Although any legislation of such length is bound to have problems, this package is especially riddled with flaws. Among them:

Senate Majority Leader Mitch McConnell, R-Ky., has already made it abundantly clear that the Invest in America Act is going nowhere in the Senate.

That doesn’t mean the bill is inconsequential, however. That’s because an infrastructure bill of some sort is almost certain to pass later this year. Federal spending on surface transportation, which focuses on the interstate highway system, expires on Sept. 30.

The Senate started producing its own reauthorization bill last summer, with a decidedly imperfect but broadly bipartisan bill sailing through the Environment and Public Works Committee.

That bill would also cause a significant spending increase, albeit not as large as the House bill, and does nothing to rein in wasteful projects, such as bike paths and sidewalks that the federal government should not be involved with.

The Senate process eventually ground to a halt over the question of how to pay for the spending. That’s a question worth deliberating at length, since there are many bad ways to pay for infrastructure.

The House bill takes the easy way out by simply not paying for the spending. That might be politically convenient, but it places a growing burden on future generations.

It is unclear what will happen next. However, one possibility that should be avoided is a “compromise” between the House and Senate bills.

Since the Senate bill is already a bipartisan compromise that would require either a tax increase or deficit spending to finance, and the House bill is a wish list for the left, legislation that falls between the two bills would still be far to the left of the status quo.

Meanwhile, neither bill reflects the way that COVID-19 has changed the national landscape. Since there are still a few months left for legislators to produce a final highway bill, they have time to review assumptions about federal transportation policy.

First, Congress should reconsider the wisdom of increasing spending on highways and transit at a time when telecommuting is becoming increasingly normalized. Fewer people commuting in cars and on trains will mean less need for pricey expansions and maintenance.

Second, Congress should stop using deficit spending as a legislative crutch to avoid tough decisions. Both parties have overseen an enormous increase in the national debt over the past two decades, and much of it has taken place over the past four months. The debt now stands at more than $26 trillion, or about $205,000 per household. Additional debt should only be used as a last resort.

Finally, Congress should pare down federal infrastructure spending to focus on core national priorities. A large portion of Highway Trust Fund spending goes toward activities of local and regional concern, such as mass transit and hiking trails.

Streamlining federal activity would bring spending to an affordable level while maintaining the quality of key assets.

Improving infrastructure policy might not be as exciting as a Fourth of July fireworks display, but it would be something worth celebrating for the hundreds of millions of people who pay for and drive on our nation’s highways.