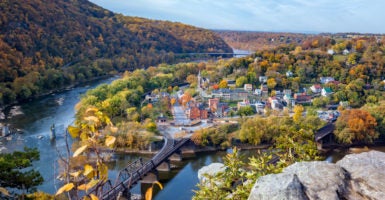 In Harpers Ferry, West Virginia, a controversy surrounding the 2019 municipal election underscores how even a small number of votes can have a significant impact on election outcomes. (Photo: Ali Majdfar/Getty Images)

A closely contested municipal election for five seats on the Harpers Ferry Town Council in West Virginia highlights the small margins with which some elections are decided, particularly local elections. It also shows how just a small amount of fraud, or—as in this case—administrative errors, can be a deciding factor in the outcome.

The Supreme Court of Appeals of West Virginia, the state’s highest court, threw out the decision of the local town tribunal that decided to not count four provisional ballots cast by eligible voters.

Let’s quickly go over the facts.

The Harpers Ferry 2019 municipal election was held on June 11, 2019. Nine candidates were running for five spots on the town council.

But three other candidate were right behind these five candidates who were elected: Nancy Singleton Case (82 votes), Deborah McGee (81 votes), and Marjorie Flynn Yost (also with 81 votes).

Case and McGee requested a recount. However, the recount did not consider any of the provisional ballots that were cast in the election. Provisional ballots are those that are cast by individuals who show up at a polling place but a question is raised about their eligibility to vote, such as when the person is not listed as a registered voter.

Federal law requires election officials to provide people in this category with a provisional ballot, which is kept separate from all other ballots. Election officials must then investigate the circumstances of all such provisional voters after Election Day. If the subsequent investigation determines that the voter should have been registered but was not due to an administrative error by a government official, the provisional ballots must be counted.

On June 29, 2019, the five newly elected Town Council members were sworn into their new position. But then, Case and McGee contested the recount and the election results, alleging that four eligible voters “were denied the right to vote based upon erroneous records that indicated that they did not reside in Harpers Ferry.”

How did these people get left off the voter registration rolls if they live in Harpers Ferry? It turns out they were all victims of bureaucratic screw-ups:

This led to Jefferson County chief deputy clerk of elections, Nikki Painter, mistakenly listing those voters as living in the neighboring town of Bolivar rather than Harpers Ferry, because Washington Street runs through the two towns, but West Washington Street is in Bolivar.

But that’s not what happened due to a glaring conflict of interest.

Under West Virginia law, “the governing body of the municipality is the judge of any contest of a municipal election.” In Harpers Ferry, that’s the Town Council. The tribunal consisted of the mayor, the town recorder, and the members of the council who had just been sworn in: Humes, Johnson, Thompson, and Premack.

Only one of the newly elected council members, Pechuekonis, did the right thing and recused himself from hearing the case.

This was a particular problem since both Johnson and Thompson won their races within the four-vote margin of provisional ballots, separating them from the two candidates contesting the election.

When Case and McGee objected to Johnson and Thompson serving on the tribunal, they were told the tribunal “ha[d] no legal authority to compel any one or more of its members to disqualify themselves.” So Case and McGee had their election contest heard and decided by the same people whose election was in question.

This calls to mind James Madison’s sage advice in Federalist 10 that “[n]o man is allowed to be a judge in his own cause; because his interest would certainly bias his judgement, and, not improbably, corrupt his integrity.”

The Supreme Court of Appeals of West Virginia overturned the election, holding that Thompson and Johnson’s actions in refusing to recuse themselves “ran afoul of common sense, logic, statutory law, and the West Virginia Ethics Code governing elected officials.”

These voters were disenfranchised due to a clerical error that stemmed from administrative problems inside the state Department of Motor Vehicles and the U.S. Postal Service, a service that many people want to give even more authority over the administration of our elections.

The mistakes were obviously unintentional, but the mistakes combined with the deliberate actions of a town council resulted in the disenfranchisement of four citizens of Harpers Ferry.

Thankfully, an injustice was rectified, and these four provisional ballots will be counted.

Regardless of whether the ultimate outcome is affected by those four ballots, as this case clearly demonstrates, local elections (and sometimes state or national ones, too) can be decided by a few votes, illustrating once again that every (legitimate) vote counts.