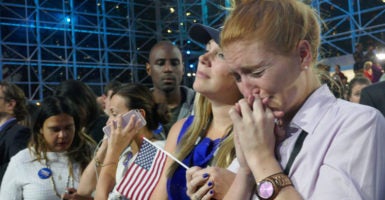 The Supreme Court unanimously ruled Monday that states can require members of the Electoral College to vote for the same presidential candidate as their respective state.

The ruling puts an end to the occasional so-called faithless electors, who vote for a candidate different than that of the state they are representing. Though many states already have laws in place that require electors to vote for the winner of their state’s popular vote, electors have at times failed to do so.

“Today, we consider whether a State may also penalize an elector for breaking his pledge and voting for someone other than the presidential candidate who won his State’s popular vote. We hold that a State may do so,” Justice Elena Kagan wrote in the court’s majority opinion for the case Chiafalo v. Washington.

Though rare, as few as 10 faithless electors could have changed the outcomes of five of the previous 58 presidential elections, The New York Times reported.

BREAKING: The Supreme Court has unanimously ruled that state “faithless elector” laws — which allow states to remove or fine Electoral College delegates who don’t vote for the presidential candidate they were pledged to support — are constitutional.

The ruling comes after courts in Washington and Colorado reached opposing conclusions in cases where electors from each state went rogue.

In 2019, the Washington State Supreme Court upheld $1,000 fines on electors who had voted for Colin Powell instead of Hillary Clinton, saying that the Constitution allowed for states to insist that their electors vote according to their respective popular votes, according to The New York Times. The electors appealed to the Supreme Court after the decision, setting the foundation for the Monday decision on Chiafalo v. Washington.

The U.S. Court of Appeals for the 10th Circuit, in Denver, Colorado, came to the opposite conclusion of the Washington State Supreme Court in August 2019, ruling that “electors, once appointed, are free to vote as they choose,” according to Judge Carolyn B. McHugh, who wrote for the majority.

The ruling was quickly petitioned in order to seek Supreme Court review of the case, “Colorado Department of State v. Baca,” with the lawyers for Colorado writing that the appeals court’s decision risks eroding “the democratic principles underpinning over two centuries of electing United States presidents.”

The 2016 election saw more faithless electors than ever before, with seven electors succeeding in casting their votes for a different candidate than their state had voted for. In addition to the three in Washington, another elector in the Evergreen State voted for Faith Spotted Eagle, a Native American tribal leader.