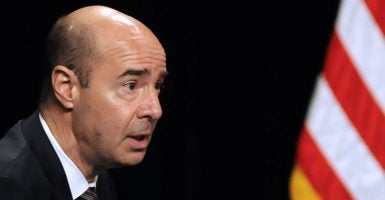 “Private employer-sponsored retirement plans are not vehicles for furthering social goals or policy objectives that are not in the financial interest of the plan,” says Labor Secretary Eugene Scalia, pictured during a May 20 roundtable with Florida Gov. Ron DeSantis, Vice President Mike Pence, and hospitality and tourism industry leaders to discuss Florida's phased reopening during the coronavirus pandemic. (Photo: Paul Hennessy/SOPA Images/LightRocket/Getty Images)

The Labor Department has proposed a new rule governing the responsibilities of those who manage retirement plans, to prioritize investors over social goals.

The department says in a press release that it receives questions periodically on how a 1974 law applies to nonfinancial objectives—such as environment, social, and public policy goals—for investment managers.

The law in question is the Employee Retirement Income Security Act, which covers pension and 401(k) investment plans.

The intent of the rule change, the Labor Department says, is to provide clear regulatory guideposts for fiduciaries of plans because of recent trends involving environmental, social, and governance investing, or ESG.

“Private employer-sponsored retirement plans are not vehicles for furthering social goals or policy objectives that are not in the financial interest of the plan,” Labor Secretary Eugene Scalia said this week in a written statement.

“Rather,” Scalia said, “ERISA plans should be managed with unwavering focus on a single, very important social goal: providing for the retirement security of American workers.”

Various progressive activist groups have pressured retirement plans to address environmental and other social concerns, including moving to divest from fossil fuels.

The Labor Department’s proposal is designed, in part, to clarify that plan fiduciaries may not subordinate an investor’s return or increase risk out of nonfinancial objectives.

In its press release, the Labor Department said the proposal would make five core changes to existing regulation:

—Add text to codify the department’s long-standing position that the law requires plan fiduciaries to select investments and investment actions based on financial considerations relevant to the risk-adjusted economic value of a particular investment or action.

—Prohibit fiduciaries from subordinating the interests of plan participants and beneficiaries in retirement income and financial benefits to nonpecuniary goals.

—Require fiduciaries to consider other available investments to meet their prudence and loyalty duties under the law.

—State that ESG factors can be “pecuniary factors” if they “present economic risks or opportunities that qualified investment professionals would treat as material economic considerations under generally accepted investment theories.”

—Add a provision for designated investment alternatives for 401(k)-type plans.

“The proposal describes the requirements for selecting investment alternatives for such plans that purport to pursue one or more environmental, social, and corporate governance-oriented objectives in their investment mandates or that include such parameters in the fund name,” the press release says.