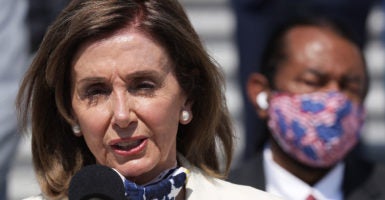 House Speaker Nancy Pelosi, D-Calif., speaks at an event on police reform June 25 on the East Front of the U.S. Capitol in Washington. The House was scheduled to vote on Democrats’ George Floyd Justice in Policing Act after rejecting a Republican resolution critical of left-wing efforts to defund the police. (Photo: Alex Wong/Getty Images)

Democrats in the House on Thursday blocked consideration of a Republican resolution opposing efforts pushed by some on the left to defund police departments across the country.

“Our resolution strongly opposes what I think is one of the craziest public policy proposals I have ever seen—this idea that we’re going to defund the police,” Rep. Jim Jordan, R-Ohio, said Thursday in remarks delivered on the House floor.

Rejected by Democrats on a straight party-line vote of 231 to 176, the resolution condemned the May 25 killing of George Floyd as “a horrific act,” but opposed efforts to defund the police in reaction to it.

Floyd, an African American, died after Derek Chauvin, a white Minneapolis police officer, pressed a knee against Floyd’s neck for more than eight minutes as he lay handcuffed on a street after his arrest. Chauvin was fired and now faces murder and manslaughter charges in Floyd’s death.

The Republican resolution notes that city councils, such as those in New York City; Hartford, Connecticut; Austin, Texas; Minneapolis; and Baltimore, are considering cuts to funding or even fully defunding their cities’ police forces.

Thursday’s Republican resolution, unanimously opposed by Democrats, also called for “justice for officers and others who have suffered from violence at the hands of extremists,” and for support for law enforcement more generally.

Democrats’ blocking of the resolution opposing efforts to defund police departments came ahead of a vote on their own George Floyd Justice in Policing Act, which was expected to come up for a vote on Thursday.

Democrats’ legislation would, among other things, “establish a national standard for the operation of police departments; mandate data collection on police encounters; [and] reprogram existing funds to invest in transformative community-based policing programs,” according to a fact sheet from the majority on the House Judiciary Committee.

On Wednesday, a Republican police reform bill was blocked by Democrats in the Senate.

The defeated House GOP resolution said that defunding the police “would leave police departments understaffed and undertrained, while also increasing the risk of violent crime to the communities of the United States, especially vulnerable communities.”

It also expressed support for peaceful protests, but condemned the violence, riots, and looting that broke out across the country following Floyd’s death, saying that “the actions of those committed to violence [do] not diminish the rights of other Americans to peacefully protest.”