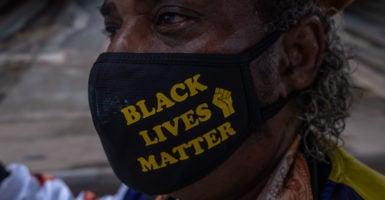 The Black Lives Matter organization has called for dismantling the nuclear family, something that likely extends beyond the goals of many supporters. Pictured: A resident of Tulsa, Oklahoma, sports a "Black Lives Matter" mask Friday during Juneteenth celebrations in Tulsa's Greenwood district, site of a massacre of black residents in 1921. (Photo: Seth Herald/AFP/Getty Images)

Black Lives Matter as a movement, or at least a slogan, recently has attracted broad support in favor of racial equality and opposition to police brutality.

Two-thirds of Americans say they either strongly or somewhat support the Black Lives Matter movement, according to a Pew Research poll.

However, at least one self-described “trained Marxist” founded the organization behind the movement, and that organization also has called for dismantling the nuclear family—something that likely extends beyond the goals of many supporters.

“This hardcore cadre, they are parasitic on genuine outrage and genuine injustice,” Scott Walter, president of the Capital Research Center, an investigative think tank, told The Daily Signal in a phone interview.

“I don’t know anyone on the planet who doesn’t think the George Floyd death was an injustice,” Walter said. “That’s why it was against the law. That’s why they [the four Minneapolis  police officers involved] are being prosecuted. Most of the people out protesting are going to be moved by the outrage of the moment. The problem is that you have this cadre.”

Walter was referring primarily to the three founders of Black Lives Matter as well as a board member with Thousand Currents, the leading funder of the group.

Here are four things to know about the founders and organization behind Black Lives Matter.

The Black Lives Matter movement began after the 2013 shooting death of Trayvon Martin, 17, in Sanford, Florida, and picked up after the fatal police shooting of Michael Brown, 18, in 2014 in Ferguson, Missouri.

The group’s co-founders are Patrisse Khan-Cullors, Opal Tometi, and Alicia Garza, all of them black women.

“The first thing, I think, is that we actually do have an ideological frame,” Khan-Cullors said in a 2015 interview with Real News Network. “Myself and Alicia in particular are trained organizers. We are trained Marxists.”

We are super-versed on, sort of, ideological theories. And I think that what we really tried to do is build a movement that could be utilized by many, many black folk. We don’t necessarily want to be the vanguard of this movement. I think we’ve tried to put out a political frame that’s about centering who we think are the most vulnerable amongst the black community, to really fight for all of our lives.

Khan-Cullors, who serves as strategic adviser to the Black Lives Matter Global Network Foundation, is an artist and organizer from Los Angeles, according to the group’s website.

Khan-Cullors, 36, is also the founder of Dignity and Power Now, a group that advocates for incarcerated people and their families. A Fulbright scholar, she is the New York Times best-selling author of  the book “When They Call You a Terrorist.”

Garza, an organizer in Oakland, California, is also special projects director for the National Domestic Workers Alliance, an advocacy group for domestic workers.

Garza, 39, was named to The Root’s 2016 list of 100 African American achievers and influencers and is the recipient of the 2016 Glamour Women of the Year Award and the 2016 Marie Claire New Guard Award. She was recognized as a Community Change Agent at the BET’s 2016 Black Girls Rock Awards.

While two founders of Black Lives Matter are on the West Coast, Tometi works out of New York. The group’s website describes her as a “Nigerian-American writer, strategist, and community organizer” and a “transnational feminist.”

Tometi, 35, created online platforms and social media strategy during the early days of the movement.

She also is executive director of the Black Alliance for Just Immigration and, according to the website, is featured at the National Museum of African American History and Culture in Washington.

According to the group’s website, the organization has a national network of about 40 chapters.

The Black Lives Matter Global Network Foundation didn’t respond directly to questions from The Daily Signal. After two days of inquiries, spokesman Jordan Jackson said in an email that the organization was “inundated” with media requests.

“Should someone be available to fulfill this request,” Jackson wrote, “I will circle back here as soon as possible.”

As a result, the foundation doesn’t have its own tax-exempt status and is instead a project of Thousand Currents that doesn’t yet have to file what are called 990 forms with the Internal Revenue Service.

Thousand Currents reported $3.35 million in donations earmarked for the BLM Global Network Foundation in 2019, according to Capital Research Center, a watchdog group for nonprofits.

Pledges of donations skyrocketed after the May 25 death of Floyd, a handcuffed black man, in police custody in Minneapolis. Those donors include major corporations.

“Thousand Currents has been a fiscal sponsor of BLM since 2016, and serves as the back office support, including finance, accounting, grants management, insurance, human resources, legal and compliance. Donations to BLM are restricted donations to support the activities of BLM,” Thousand Currents said in an email to The Daily Signal.

It deferred other questions to the BLM Global Network Foundation.

Thousand Currents reportedly gave a total of $90,130 in grants to the Santa Clarita, California-based Black Lives Matter Foundation, according to its tax filings for fiscal years 2017 and 2018.

This second organization, according to BuzzFeed, is a one-man operation separate from the Black Lives Matter Global Network Foundation. After Floyd’s death, the foundation in Santa Clarita raked in $4.3 million in donations, BuzzFeed reported.

To add to the mix, a separate Movement for Black Lives has financial sponsorship from the Alliance for Global Justice.

The George Soros-backed Open Society Foundations reportedly contributed about $33 million to groups associated with the Black Lives Matter movement. However, it isn’t clear whether that money made it to the BLM Global Network Foundation, according to Capital Research Center.

3. What Does the Organization Want?

Black Lives Matter Global Network Foundation doesn’t hide its more out-of-the mainstream views, although many of them are stated in broad terms.

“We disrupt the Western-prescribed nuclear family structure requirement by supporting each other as extended families and ‘villages’ that collectively care for one another, especially our children, to the degree that mothers, parents, and children are comfortable,” the organization says on its website.

The website uses the word “comrades” several times, in one instance to say: “We practice empathy. We engage comrades with the intent to learn about and connect with their contexts.”

Although the organization states that “We are unapologetically Black in our positioning,” it focuses heavily on something that traditionally has not been part of African American activism—sexual orientation and gender identity:

We make space for transgender brothers and sisters to participate and lead. …  We are self-reflexive and do the work required to dismantle cisgender privilege and uplift Black trans folk, especially Black trans women who continue to be disproportionately impacted by trans-antagonistic violence. …

We build a space that affirms Black women and is free from sexism, misogyny, and environments in which men are centered.

“When we gather, we do so with the intention of freeing ourselves from the tight grip of heteronormative thinking, or rather, the belief that all in the world are heterosexual (unless s/he or they disclose otherwise),” it says.

It also fights age discrimination, stating: “We cultivate an intergenerational and communal network free from ageism.”

4. What Is Thousand Currents?

Thousand Currents, which underwrites the Black Lives Matter Global Network Foundation, describes itself as an organization  that “envisions a world where humanity thrives as a creative force that is in reciprocal [sic] and interdependent with nature, and creates loving, equitable and just societies.”

Notably, the vice chairwoman of the board of directors for Thousand Currents is Susan Rosenberg, a convicted felon who participated in bombing buildings in the Northeast and Washington, D.C.

In an email Wednesday, The Daily Signal asked Thousand Currents about Rosenberg’s position on the board of directors. That morning, the organization’s webpage about the board included a short bio of Rosenberg. By late afternoon, that page no longer was available and a message said: “Ooops. Sorry. This page doesn’t exist.”

Rosenberg was part of M19, short for May 19th Communist Organization. Her memoir “An American Radical,” details her 16 years in federal prison.

At her sentencing hearing in 1984, Rosenberg urged supporters to “continue to fight for the defeat of U.S. imperialism.”

“One of the biggest bombs they had went off in the U.S. Capitol and tore up that fine Democratic slave owner John C. Calhoun’s portrait,” Capital Research Center’s Walter said of Rosenberg and M19. “The Weather Underground wasn’t really radical enough for her. Some of those people ended up wimping out and going off to be stock brokers and whatever. That wasn’t good enough for her and she stayed radical.”

M19’s bombings reportedly were for the sake of causing enough disruption to prevent President Ronald Reagan’s reelection in 1984. Rosenberg was a member of the Weather Underground in the 1960s. President Bill Clinton commuted her 58-year sentence on his last day in office in January 2001.

According to Capital Research Center, Thousand Currents also is a grant-making organization that assists various other left-of-center causes and has focused heavily on opposing genetically modified organisms.

Donors include the John D. and Catherine T. MacArthur Foundation, the NoVo Foundation, and the Libra Foundation. It had annual revenue of $6.8 million in 2018.

This report has been modified to correct the name of the NoVo Foundation.