Obamacare 2.0 Bill Would Be a Windfall, but Pyrrhic Victory, for Insurance Lobby 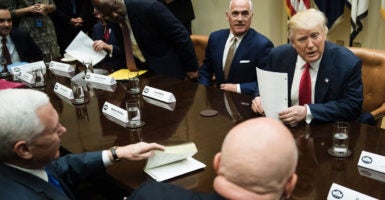 In December 2013, 11.8 million Americans had individual health insurance coverage. The federal government provided no subsidies for that coverage.

According to Congressional Budget Office data, the federal government sent $248 billion in premium and related subsidies to health insurance companies over those six years.

That investment produced a net increase in individual coverage of 600,000. That works out to nearly $69,000 annually per net newly insured person.

On June 29, the House is expected to take up the Patient Protection and Affordable Care Enhancement Act (H.R. 1425), a bill that would shower billions more on the health insurance industry, create new federal government programs to paper over Obamacare’s underlying failures, penalize states that have not extended Medicaid coverage to able-bodied adults, and place government price controls on drugs.

The measure is a dream bill for the insurance lobby.

It would make federal premium subsidies more generous to existing recipients and available to everyone, regardless of income.

Under current law, for example, a 40-year-old individual with an income at 150% of the federal poverty level ($19,140) pays an average of $64 a month for individual coverage this year.

H.R. 1425 would make that coverage free. The insurance company would get a check for the entire monthly premium ($461) from the federal government. Under the bill, insurance companies would collect bigger premium subsidies for everyone who currently gets them.

It’s not clear whether increasing subsidies will meaningfully reduce the number of uninsured. An estimated 99% of uninsured Americans have access to affordable health coverage, regardless of income or medical condition.

H.R. 1425 would clearly be good news for insurers, who wouldn’t have to hassle with collecting premiums from many of their existing customers. They would still have to pay medical claims, of course, but the bill would lift much of that burden from their shoulders as well.

It creates a new federal program that requires taxpayers to pick up much of the costs of large medical claims for people with individual coverage. Estimated annual cost: $10 billion.

The Trump administration has granted waivers to 12 states to establish similar programs. The states that have these waivers finance them with a combination of state funds and federal dollars that would otherwise have been paid to insurance companies in the form of premium subsidies.

These waivers not only have reduced premiums, but they’ve done so without increasing federal spending. H.R. 1425 would instead replace these successful waiver programs with a new federal subsidy of insurance companies.

The H.R. 1425 windfall comes at a propitious moment for the insurance industry. The most successful players in the individual market weathered the shock of Obamacare’s early years and, fortified by federal handouts, are pocketing handsome profits.

Five big players now collectively control half the individual market, growing their market share by 20 percentage points between 2015 and 2019. Centene, for example, increased enrollment by more than 1,100% over that time, gaining 1.6 million customers, even as overall individual market enrollment shrank by 4.3 million.

Centene and four other big insurers will benefit most from H.R. 1425’s subsidies.

The insurance industry also is benefiting from the COVID-19 pandemic, even as the health care sector has plunged into recession. The sector contracted by 2.25% during the first quarter and shed 1.9 million jobs during April, a 9% decline in the number of medical workers during a national health emergency.

While some of those jobs returned in May, hospitals and nursing homes continued to furlough workers during that month.

Those losses came largely as the result of government bans on non-emergent care, which prevented people from being treated for acute and chronic illnesses, and from public fear of COVID-19, which produced a 42% drop in the number of emergency room visits between January and April, as people avoided seeking care even in medical emergencies.

That means insurers are paying much less in medical claims than they expected when they set premiums for 2020, fattening their profit margins. The House seems poised to pass a bill that would fatten them even more.

It’s a dangerous thing for an industry to grow dependent on government subsidies. It is especially dangerous when many in the political party enlarging those subsidies are fundamentally hostile to that industry.

Most House Democrats favor “Medicare for All,” which proposes the extinction of private health insurance. Former Vice President Joe Biden wants to create a public option, a government-run “insurance company” that would “compete” with private insurers.

Insurers loathe those proposals, even as they lust after more government handouts. Those handouts make the Democrats’ case that insurers are unnecessary middlemen between the government and the people. If insurance companies need government subsidies to prosper, why do we need them at all?

The insurance lobby will celebrate House passage of H.R. 1425, but that celebration could end quickly.

Next year, insurers could find themselves fighting an administration and Congress eager to take the next step toward Medicare for All.