Criminals Tearing Down DC Statues Should Be Prosecuted. Here Are the Laws They’re Violating. 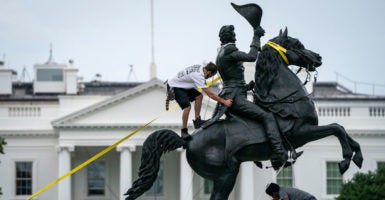 It seems like every day angry mobs are trying to tear down statues of people they don’t like. And it is not just limited to statues of Confederate soldiers. Mobs have attacked statues of Mahatma Gandhi and former presidents Andrew Jackson and Ulysses Grant.

The attempt to topple the statue of Jackson—which fortunately was foiled—occurred in Lafayette Square, right across the street from the White House.

On Tuesday, the president tweeted that the federal government would use a little-known federal statute to prosecute criminals who destroy statues that are covered by that law.

He stated that he has “authorized the Federal Government to arrest anyone who vandalizes or destroys any monument, statue, or other such Federal property,” adding, “There will be no exceptions!”

That law, the Veterans’ Memorial Preservation and Recognition Act of 2003, (found at 18 U.S. Code § 1369) makes it a federal crime for anyone to willfully injure or destroy, or attempt to injure or destroy, “any structure, plaque, statue, or other monument on public property commemorating the service of any person or persons in the armed forces of the United States.”

The items must be located on property owned by, or under the jurisdiction of, the federal government. While this obviously would not apply to all the statues that are being desecrated—although state laws would certainly apply to those that are not covered—it will apply to many of them.

If convicted, the defendant can receive up to 10 years in federal prison.

While many current Democratic senators—including Dianne Feinstein, Richard Durbin, Chuck Schumer, Ron Wyden, Jack Reed, and Patrick Leahy (not to mention then-Sen. Joe Biden)—voted in favor of that law, it remains to be seen how many of them will support enforcement of the very act they supported.

Those laws are enforced by the United States attorney for the District of Columbia, who is both the federal prosecutor responsible for prosecuting federal crimes and ostensibly the local district attorney, who handles violations of the D.C. criminal code.

So regardless of whether the scofflaws and statue-destroyers violate the Veterans’ Memorial and Preservation Act, there is ample law under the criminal code in D.C. to hold criminals accountable.

Depending on the facts and circumstances, prosecutors could consider filing any of the following charges against criminal scofflaws under D.C. Code.

Anyone who “maliciously injures or breaks or destroys, or attempts to injure or break or destroy, by fire or otherwise, any public or private property, whether real or personal, not his or her own, of the value of $1,000 or more” is guilty, and subject to 10 years in jail or fined. If the property has “some value,” then they can get 180 days in jail and/or a fine if convicted.

Anyone within the District of Columbia who throws any stone or other missile in any street, avenue, alley, road, or highway, or open space, or public square, or enclosure, or throws any stone or other missile from any place into any street, avenue, road, or highway, alley, open space, public square, or enclosure can be found guilty of a misdemeanor and fined up to $500.

It is unlawful for anyone, in any place open to the general public, to “intentionally or recklessly act in such a manner as to cause another person to be in reasonable fear that a person or property in a person’s immediate possession is likely to be harmed or taken.”

Furthermore, you cannot incite or provoke violence where there is a likelihood that violence will ensue. You can’t “direct abusive or offensive language or gestures at another person (other than a law enforcement officer while acting in his or her official capacity) in a manner likely to provoke immediate physical retaliation or violence by that person or another person.”

It’s pretty obvious, from watching the videos of the mobs, that many people are engaged in disorderly conduct.

Under the statute, it is also “unlawful for a person to engage in loud, threatening, or abusive language, or disruptive conduct, with the intent and effect of impeding or disrupting the orderly conduct of a lawful public gathering, or of a congregation of people engaged in any religious service or in worship, a funeral, or similar proceeding.”

Sound familiar? The statute covers other such abusive behavior.

The penalty if convicted of disorderly conduct is imprisonment for not more than 90 days or a fine.

Disorderly conduct in public buildings or grounds; injury to or destruction of United States property (22-3311).

This statute seems to cover a lot of the criminal behavior of rioters in D.C. It states in part: “Any person guilty of disorderly and unlawful conduct in or about the public buildings and public grounds belonging to the United States within the District of Columbia, or who shall willfully injure the buildings or shrubs, or shall pull down, impair, or otherwise injure any fence, wall, or other enclosure, or shall injure any sink, culvert, pipe, hydrant, cistern, lamp, or bridge, or shall remove any stone, gravel, sand, or other property of the United States, or any other part of the public grounds or lots belonging to the United States in the District of Columbia” is guilty of this statute. If convicted, the person can get six months in jail and/or a fine.

We have had debates before about whether to remove certain statues because of the feelings they evoke in some observers. We will no doubt have those conversations again. But one should never give into a mob.

These hoodlums should be prosecuted. As the president said, there should be no exceptions.