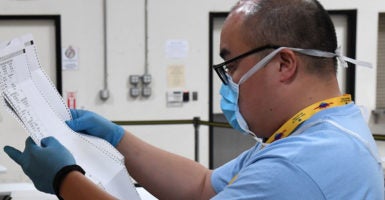 Political progressives who favor the expanded use of mail-in balloting have been telling the American people not to pay attention to that man on Twitter who sees a potential connection between their proposals and massive voter fraud.

The Brennan Center for Justice, Priorities USA, and the Lawyers’ Committee for Civil Rights Under Law are three of the groups that, with an eye toward the November elections, are calling on government officials to make it easier to vote by mail.

“There is NO WAY (ZERO) that Mail-In Ballots will be anything less than substantially fraudulent,” Trump said in a May 26 tweet. “Mail boxes will be robbed, ballots will be forged & even illegally printed out & fraudulently signed.”

The president directed this and a subsequent tweet at California Gov. Gavin Newsom, a Democrat, who recently expanded mail-in balloting in his state.

His action was necessary as a precaution against COVID-19, Newsom said.

Twitter, in a controversial move, posted a message below Trump’s tweet reading: “Get the facts about mail-in ballots.”

“With all-mail [voting], they just send out a ballot and without certainty it’s going to a live voter,” Hans von Spakovsky, a former member of the Federal Election Commission who is a senior legal fellow at The Heritage Foundation, told The Daily Signal for a recent report on the differences between absentee voting and all-mail voting.

“The problem with all-mail voting is that ballots are mailed to every registered voter,” von Spakovsky said. “We know voter registration rolls are in bad shape all across the country, with multiple duplications and sending out ballots to people that don’t live there.”

The Heritage Foundation maintains an Election Fraud Database that tracks “proven instances of voter fraud” on a state-by-state basis. The database includes more than 1,200 cases.

Here are things to know about three of the major organizations advocating an expansion of voting by mail or complete switch to all-mail elections:

The Brennan Center for Justice, based in the New York University Law School, was founded by former law clerks of U.S. Supreme Court Justice William Brennan, a celebrated liberal.

The Brennan Center advocates that each state make mail-in balloting as widely available as possible. In an online post, the center called on Congress to provide states with $4 billion “to protect election integrity in November.” The funds presumably would be used in part to facilitate some form of absentee voting.

Pointing to COVID-19, the Brennan Center argues that mail-in voting can help to ensure that citizens stay safe and healthy while exercising their right to vote.

The legal institute, known for advancing progressive policies and causes, has offered its own critiques of Trump’s tweets while defending the more widespread use of mail-in ballots.

The ballot envelope itself can be designed to prevent fraud. Voters have to sign the envelope, and that signature can be compared to the one that’s already on file for the voter.

The Brennan Center stops short of embracing universal voting by mail in the elections in November, saying there is not enough time to implement the necessary measures.

The Daily Signal sought comment from the Brennan Center for this report, but a spokeswoman declined in an email.

One of the major funders behind the self-described nonpartisan law and policy institute is George Soros, the Hungarian-American billionaire hedge fund manager known for financing progressive political causes.

Soros’ Open Society Foundations (formerly Open Society Institute) has been one of the largest donors to the Brennan Center, according to Influence Watch, a project of the Capital Research Center.

The nonprofit advocacy group Priorities USA and its super PAC, Priorities USA Action, have supported lawsuits across the country aimed at loosening restrictions on how and when ballots may be mailed.

Super PACs are political action committees that can raise and spend unlimited sums from wealth sources such as corporations and unions. However, they are not permitted to make direct donations to political candidates or to coordinate their efforts with political candidates.

Most recently, Priorities USA funded a lawsuit filed with the Commonwealth Court of Pennsylvania that sought extensions for mail-in ballot deadlines and asked the court to allow third parties to collect and return absentee or mail-in ballots. A Commonwealth Court judge denied the plaintiffs’ efforts to extend the deadline for turning in mailed ballots, and the case is on appeal to the Supreme Court of Pennsylvania.

The Daily Signal sought comment from Priorities USA for this report, but it did not respond.

In March, Priorities USA Action announced it would spend $6 million on anti-Trump advertisements attacking the president’s handling of the COVID-19 pandemic.

Whenever a courtroom opportunity exists to challenge election laws that set limits on use of mail-in ballots, the Lawyers’ Committee for Civil Rights Under Law is almost certain to intervene.

On May 27, the Washington-based group joined with the American Civil Liberties Union and the ACLU of Kentucky to file a federal lawsuit claiming Kentucky state officials haven’t taken steps to make certain eligible voters can cast ballots in November without jeopardizing their health because of the COVID-19 pandemic.

Kentucky’s mail-in ballot requirements are among the provisions challenged in the suit. Voters may qualify only if they satisfy what the Lawyers’ Committee describes as a “narrow list of excuses.”

Action in Virginia ahead of that state’s primary Tuesday also could have ramifications for voting by mail.

The Lawyers’ Committee filed an amicus brief in the District Court for the Eastern District of Virginia challenging “false assertions” by plaintiffs represented by True the Vote, a nonprofit group that promotes ballot integrity.

“In March, the Virginia Department of Elections took the commonsense step of expanding access to the absentee voting process in the upcoming primary election due to the COVID-19 pandemic,” a press release from the Lawyers’ Committee says. “Several voters, represented by True the Vote, have filed a federal lawsuit seeking to reverse Virginia’s efforts to promote access to the ballot for the primary election.”

On May 29, Judge Rossie D. Alston Jr. ruled against the complaint about expanded absentee balloting.

“The decision marks another major loss for True the Vote, an organization that has filed multiple lawsuits seeking to restrict access to the mail-in voting process,” Don Owens, communications director of the Lawyers’ Committee, wrote that day.

In a statement released the same day, John Powers, counsel for the Lawyers’ Committee, said:

Judge Alston’s decision today protects the right to vote of Virginia voters who are concerned about voting in person and risking their health in the midst of the COVID-19 pandemic. Telling voters to knowingly risk their health and their lives to exercise their right to vote is an attack on voting rights, plain and simple. It was true in 1920, and it’s true in 2020.

The Daily Signal sought comment from the Lawyers’ Committee for Civil Rights Under Law for this report, but it did not respond.

The organization first came together in response to a meeting President John F. Kennedy held at the White House in summer 1963, several months before his assassination, according to the group’s website.

Influence Watch’s list of donor organizations to the Lawyers’ Committee includes left-leaning foundations and unions such as the American Federation of Teachers, the Hopewell Fund, the Rockefeller Brothers Fund, Sixteen Thirty Fund and United Food and Commercial Workers.

Like the Brennan Center, the Lawyers’ Committee has not been swayed by evidence and allegations of voter fraud and hostile to conservatives’ ballot integrity initiatives. Last year, the Lawyer’s Committee joined with the ACLU, its Texas affiliate, and other groups to sue Texas officials who were attempting to clean up the state’s voter rolls.