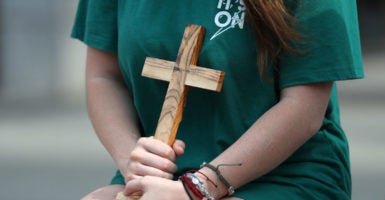 Americans simply want their freedom to attend houses of worship treated equally with the freedom to attend peaceful protests or to go to a casino. Pictured: A parishioner talks with a priest outside St. Dominic Catholic Church on April 8, Holy Wednesday, in the Lakeview neighborhood of New Orleans. (Photo: Chris Graythen/Getty Images)

In each case, churches and religious organizations challenged a governor’s restrictions on meeting in person at houses of worship while allowing other group activities to proceed, saying those orders violated the First Amendment.

Illinois Gov. J.B. Pritzker and Louisiana Gov. John Bel Edwards, both Democrats, changed their positions on churches to treat them more equitably with other institutions before the courts issued decisions.

But timeliness doesn’t absolve the Chicago-based U.S. Court of Appeals for the 7th Circuit of its misguided conclusion that a governor can declare liquor stores and marijuana dispensaries to be essential but not the free exercise of religion.

Nor should timeliness detract from the heartening candor found in a  concurring opinion by a judge on the New Orleans-based U.S. Court of Appeals for the 5th Circuit.

At the outset of the pandemic, public officials declared that the only way to prevent the spread of the virus was for everyone to stay home and away from each other. They ordered citizens to cease all public activities to the maximum possible extent—even the right to assemble to worship or to protest.

But circumstances have changed. In recent weeks, officials have not only tolerated protests—they have encouraged them as necessary and important expressions of outrage over abuses of government power. For people of faith demoralized by coercive shutdown policies, that raises a question: If officials are now exempting protesters, how can they justify continuing to restrict worshippers?

The answer is that they can’t. Government does not have carte blanche, even in a pandemic, to pick and choose which First Amendment rights are ‘open’ and which remain ‘closed.’

The discrimination against houses of worship by governors and local officials across the nation has been appalling.

Faithful Americans reacted to initial government-imposed restrictions due to COVID-19 with the same willingness to limit their activities as everyone else. Now, these Americans simply want their freedom to attend houses of worship treated equally with the freedom to attend peaceful protests or to go to a casino—both of which have been deemed by some governors as more essential.

That kind of blatant discrimination and religious hostility must end.

It is often lamented that the wheels of justice grind slowly. In our culture of 24-hour news, sound bites, and clickbait, the tension between the fast-paced events of the day and the laborious strides of the judicial system is heightened even further.

When two appellate court decisions within two days of each other reach different conclusions on the same question, the search for immediate answers becomes an exercise that is all the more exasperating. Yet one thing becomes clear: The facts on the ground may be changing daily or even by the hour, but the principled foundation upon which our republic is built is timeless and must not be compromised to reflexively suit the impulses of elected officials or constantly evolving public opinion.

When those entrusted with power to protect the God-given rights of the people do so selectively, arbitrarily picking and choosing which freedoms are worthy of protection and to what extent, then we no longer are a nation governed by the rule of law but by the whims of men.

Many Americans rightly are perplexed by officials who tell them they must sit at home instead of going to their house of worship while thousands march shoulder to shoulder in city streets across the country. This inconsistent application of the First Amendment can only exacerbate the division and strife that already plague our nation.

The beauty of the First Amendment is in its protection of all religion, speech, press, and peaceful assemblies equally, without any regard to the popularity of the ideas or the identity of those advocating them. If our republic is to heal, we must hold ourselves and those we entrust with power to the same principled standard.