Minnesota City to Vote on Removing ‘Chief’ From Job Titles, Calling It a Microaggression 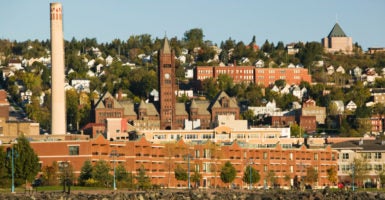 A Minnesota city is considering deleting “chief” from job titles, citing how it promotes the marginalization of American Indians. (Photo: Walter Bibikow/Getty Images)

A Minnesota city mayor is pushing city council members to delete “chief” from job titles, citing how it promotes the marginalization of American Indians.

The City Council is planning to vote Monday on whether the titles of chief administrative officer and chief financial officer should be changed to city administrator and finance director, respectively, according to the Star Tribune.

Such changes should occur “so that we have more inclusive leadership and less language that is rooted in hurt and offensive, intentional marginalization,” Duluth Mayor Emily Larson said at a news conference Wednesday.

Larson is reportedly also considering making the same change for the city’s police and fire chiefs, though there are concerns due to the widespread use of this title among public safety officials across the country. In addition, she is advocating for gender-neutral language for the position of mayor among the city’s legal foundation.

The title of chief “may put people down based off their race or culture” and that it is a “racial epithet” and “microaggression,” Alicia Kozlowski, Duluth’s community relations officer, told the Star Tribune.

Similar discussions surrounding American Indian culture have plagued the NFL and MLB for years among teams like the Kansas City Chiefs, the Washington Redskins, and the Cleveland Indians, including renewed calls for changes amid protests against racism.

The authorship of this article has been corrected.