US Should Keep Troops in Germany 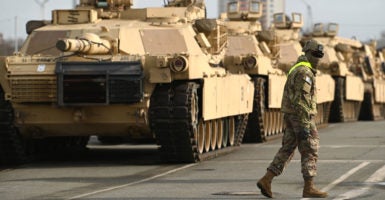 President Donald Trump announced this week that he plans to reduce the number of U.S. soldiers in Germany by 9,500—roughly 28% of the force currently stationed in the country.

Trump has long and rightfully complained about Germany’s lack of defense spending and cited this as a major reason behind his decision.

Even with Germany’s pathetic levels of defense investment, removing these troops now would denigrate the significant efforts the Trump administration has made in bolstering collective defense in Europe, while ultimately undercutting transatlantic security moving forward.

So far during his first term, Trump has enhanced and increased the U.S. military presence in Europe. There are now more permanently based U.S. troops in Europe, more pre-positioned stockpiles, more U.S. troops forward-deployed in places like Poland, more patrols in the Black Sea, more U.S. forces rotating to Europe, and more training exercises than under the Obama administration.

Even with the Trump administration’s cuts to European Deterrence Initiative funding in fiscal years 2020 and 2021, spending for this initiative is still considerably higher than it was during the previous administration.

In addition to boosting the U.S. military presence in Europe, the Trump administration has had success in moving North Atlantic Treaty Organization allies toward spending more on defense.

As a result, NATO defense spending continues to trend upward. As stated in NATO’s recent annual report, “2019 marked the fifth consecutive year of growth in defense spending for European allies and Canada, with an increase in real terms of 4.6% from 2018 to 2019.”

Trump has a legitimate gripe when it comes to Germany. It only spends 1.3% of gross domestic product on defense—well below the NATO standard of 2%.

In the past few years, the German military has had to train with broomsticks instead of rifles and civilian cars instead of tanks. At one point, it had only four Eurofighter jets ready for operations. (Yes, you read that correctly, four planes—not four squadrons!)

This is woefully pitiful considering Germany is Europe’s largest economy.

However, as miserable as Germany’s defense spending is, this is still no justification for removing U.S. troops.

The commonly held belief that U.S. forces are in Europe to protect European allies at the expense of the American taxpayer is wrong. U.S. troops are in Europe first and foremost for U.S. national security interests.

Of course, the presence of U.S. forces in Europe contributes to the collective defense of U.S. allies on the Continent, but this is a consequence of, not the reason for, maintaining a robust presence.

Do not look at Europe. Look around it.

From the Arctic to the Levant, from the Maghreb to the Caucasus, Europe is at one of the most important crossroads of the world. This region also has some of the world’s most vital shipping lanes, energy resources, and trade chokepoints.

Most of these regions have long histories of instability, and a potential for future instability that could directly affect the security interests and economic well-being of the United States and its allies.

U.S. bases in Europe provide American leaders with flexibility, resilience, and options in a dangerous, multipolar world. The huge garrisons of American service personnel in Europe are no longer the fortresses of the Cold War, but the forward-operating bases of the 21st century. The U.S. needs to have the tools available to react to events in America’s interests.

The Department of Defense’s new National Defense Strategy places a very high premium on having sufficient forward-stationed forces in place for both deterrence and warfighting.

Some of America’s oldest and closest allies are in Europe. The U.S. shares with this region a strong commitment to the rule of law, human rights, free markets, and democracy. Many of these ideas, the foundations on which America was built, were brought over by the millions of immigrants from Europe in the 17th, 18th, and 19th centuries.

During the course of the 20th century, millions of Americans have fought, and many have died, for a free and secure Europe.

A stable, secure, and economically viable Europe is in America’s direct economic interest. For more than 70 years, NATO’s and the U.S. military’s presence in Europe have contributed to European stability, which has economically benefited both Europeans and Americans.

Russia is trying to undo this stability, and threatens NATO members and U.S. interests in the region.

In 2014, Russia used military force to change borders in Europe for the first time since 1945 when it invaded Ukraine. As the 2017 National Security Strategy states, “Russia seeks to restore its great power status and establish spheres of influence near its borders,” and that it is “the most significant existential threat to the United States.”

While there have been some media reports that more U.S. troops might be sent to Poland, this does not fill the massive hole created by removing almost 10,000 U.S. soldiers permanently based in Germany. Instead of it being an “either-or” situation, the U.S. should increase its soldiers in Poland while maintaining troop numbers in Germany.

Whether preparing U.S. and allied troops and deploying them to regional crisis, or responding to a humanitarian incident in the region, history has shown that the U.S. can more quickly and effectively project power and react to the unexpected using its forward-based military capabilities in Europe.

Reducing this capability will only make America weaker on the world stage. America’s economic and security interests require a stable Europe, and it is the U.S. military presence in Europe that helps to maintain European stability. The U.S. should maintain, or even increase, the number of forces it has in Europe. Congress should endeavor to block any attempt to remove forces from Europe.