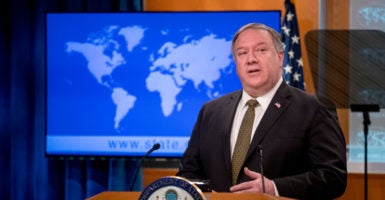 Secretary of State Mike Pompeo, pictured during a June 10 news conference at the State Department, recently highlighted the political bias of the International Criminal Court, its ineffectiveness in fulfilling its mandate, and its procedural weaknesses, such as permitting hearsay evidence. (Photo: Andrew Harnik/POOL/AFP/Getty Images)

The sanctions could also be applied to persons that have “materially assisted, sponsored, or provided financial, material, or technological support for, or goods or services to or in support of” the International Criminal Court’s efforts to  “investigate, arrest, detain, or prosecute” U.S. or allied country personnel without the consent of that country’s government.

That continues the Trump administration’s strong pushback against the International Criminal Court  since the court’s prosecutor announced a formal investigation into alleged war crimes in Afghanistan that could lead to charges against U.S. elected officials, military personnel, and other government employees.

In a press conference Thursday announcing the executive order, Secretary of State Mike Pompeo, Secretary of Defense Mark Esper, Attorney General William Barr, and national security adviser Robert O’Brien laid out U.S. objections to the court and why the step was necessary.

Pompeo highlighted the political bias of the court, its ineffectiveness in fulfilling its mandate, and its procedural weaknesses, such as permitting hearsay evidence.

Esper highlighted the proven record of the U.S. legal system in investigating and holding accountable those who violate U.S. laws, including U.S. military personnel accused of war crimes.

O’Brien emphasized that the U.S. has never ratified the Rome Statute that created the court, has consistently rejected its jurisdiction, and is in no way obligated to cooperate with it.

Barr reiterated that the U.S. never consented to the court’s jurisdiction and expressed concern that it was being manipulated by U.S. adversaries. He said that the U.S. had “substantial, credible information that raises serious concerns about a long history of financial corruption and malfeasance at the highest levels of the office of the prosecutor.”

For all of those reasons, U.S. actions to protect its people are more than justified.

Some have interpreted the president’s executive order as an aggressive act toward the court. In fact, it is defensive.

It was the International Criminal Court that decided to launch an investigation, knowing that the U.S. rejected its jurisdiction. A response to that overreach by the court is entirely appropriate.

As Heritage Foundation analysts detailed in a paper published after the International Criminal Court’s Appeals Chamber determined that the Afghanistan investigation could proceed in March, the United States has consistently declined to join the court because of its broad, unaccountable prosecutorial powers, the threat it poses to American national sovereignty, and other deficiencies.

Any attempt to target American, Israeli, or allied personnel for prosecution without their consent rightfully should be met with a vigorous response.