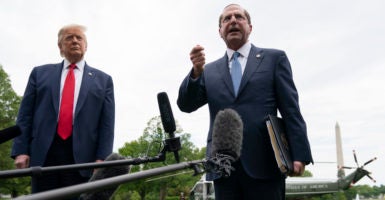 President Donald Trump and Health and Human Services Secretary Alex Azar speak to reporters May 14 on the way to Marine One on the South Lawn of the White House. (Photo: Drew Angerer/Getty Images)

The Obama administration’s 2016 regulation, already vacated by a court ruling, also redefined sex-based discrimination in health care to include questions of gender identity.

The old rule would have imposed nearly $3 billion in costs on the economy, the Department of Health and Human Services said in announcing the change. Prompted by the Affordable Care Act, popularly known as Obamacare, the rule had not been implemented after being halted in court.

When Congress passed the Obamacare law in 2010, it included a section broadly prohibiting discrimination among health insurance plans.

Under the  Obama administration, HHS tried to apply that provision to both abortion and gender identity in the 2016 rule. The rule defined gender identity as “one’s internal sense of gender, which may be male, female, neither, or a combination of male and female.”

The real-world effects of prioritizing gender identity in health care became clear after a 32-year-old pregnant woman went to the emergency room complaining of abdominal pains and claiming to be a man.

The attending nurse treated the patient as a man, based on the electronic medical record, and the end result was a stillborn baby in a case first reported by The New England Journal of Medicine in May 2019.

“That’s one example where confusion over what the meaning of sex is—whether it’s based on biology or based on gender identity—can have some real-world and in this case tragic consequences. That’s why clarity is so important,” Roger Severino, director of the HHS Office for Civil Rights, told The Daily Signal.

“This [new] rule will establish clarity over the confusion that was unleashed by the Obama administration’s previous definition, which included male, female, neither, both or some combination, which is very difficult to administer in a health care setting.”

The new rule will enforce the provision by returning to the government’s interpretation of sexual discrimination according to the plain meaning of the word “sex” as male or female and as determined by biology, HHS said.

The 2016 regulation did not recognize sexual orientation as a protected characteristic, and the Trump administration’s rule doesn’t change that.

The final rule keeps a section that ensures physical access for individuals with disabilities to health care facilities, as well as communication technology to assist those who have impaired vision or hearing.

Regulated entities still will have to provide written assurances of compliance to HHS.

“Truth matters and words have meaning,” said Ryan T. Anderson, a senior fellow at The Heritage Foundation, asserting in a written statement that the Trump administration was right to rescind the previous rules:

In addition to being an unlawful abuse of agency power, these rules would have caused serious harm. They would have required doctors, hospitals, and health care organizations to act in ways contrary to their best medical judgments, their consciences, and the physical realities of their patients, or face steep fines and become easy targets for unreasonable and costly lawsuits.

All people should be treated with dignity and respect. Therefore, federal law should not outlaw reasonable disagreements about the best medical care for gender dysphoria. Nor should federal law force anyone to violate their pro-life conscience or the privacy and safety of others in the name of political correctness.

The revised rule provides protections for non-English speakers, including the provision of translators and interpreters.

However, the final rule relieves Americans of approximately $2.9 billion in regulatory costs over five years by eliminating a mandate for regulated health care entities to insert “notice and taglines” to patients and other consumers in 15 or more languages in almost every mailing. Those costs got passed down to consumers.

In October 2019, a second federal court agreed. That same month, the initial federal court vacated the Obama HHS rule and remanded the provisions it found unlawful back to the department.

The court action stemmed in part from an Obama administration  rule regarding abortion. Existing laws said doctors and nurses can’t be compelled to perform an abortion if it would violate thier religious beliefs or conscience.

“Other federal laws prohibit discrimination against health care providers who refuse to participate in abortion,” Severino said. “If not performing abortion is sex discrimination, then of course you have clear conflicts of federal law protecting conscience.”

Also Friday, the Department of Housing and Urban Development began to undo an Obama administration regulation by proposing a rule to allow men’s and women’s shelters to make their own sex-specific housing policies.

“The Trump administration is also correct to unwind an Obama-era housing regulation that imposed a gender identity mandate at the expense of privacy and safety,” Anderson said. “The proposed HUD rule allows shelters to determine their own policy on single-sex housing, thus protecting female-only spaces.”