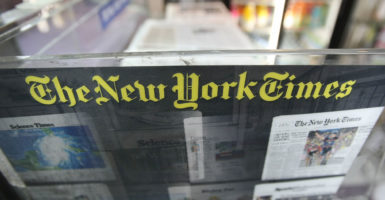 Much like campuses, The New York Times is now on record saying its staff is to be treated like young students who must be coddled and protected from ideas they don’t like. (Photo: Mario Tama/Getty Images)

Two weeks ago, if you’d asked what American institution was most intolerant of dissenting opinion, preoccupied with promoting radical ideology, and prone to erupting into disruptive temper tantrums, the answer would have been easy. Now it’s not so clear—the hysteria on college campuses has spread to America’s newsrooms.

Over the weekend, the opinion page editor of The New York Times, James Bennet, resigned under pressure, and another opinion editor, Jim Dao, was reassigned to the newsroom.

Their offense was soliciting and publishing an op-ed by GOP Sen. Tom Cotton last week on invoking the Insurrection Act. After recent protests in over 700 cities, polling showed a majority of Americans, including nearly 4 in 10 African Americans, were amenable to using the military to restore order.

Whatever you think of the need for the Insurrection Act, which was last used during the Rodney King riots in Los Angeles in 1992, Cotton’s op-ed had undeniable news value. That didn’t matter to the more than 1,000 employees of the Times who signed a letter objecting to the Cotton op-ed.

“Running this puts Black @NYTimes staff in danger,” was the message that upset Times employees spread across Twitter.

According to Times media columnist Ben Smith, the paper’s union advised the employees to make their complaint a “workplace safety” issue to prevent retribution by management, but it’s no coincidence their argument dovetails with the illiberal rhetoric emanating from college campuses.

Ironically, three years ago, Bennet published an op-ed by an academic making the suspect argument that some kinds of offensive speech are “literally a form of violence.”

And much like campuses, the Times is now on record saying its staff is to be treated like young students who must be coddled and protected from ideas they don’t like. Katie Kingsbury, who was made acting editorial page editor following Bennet’s resignation, has already sent a note to staff indulging their sensitivities.

“Anyone who sees any piece of Opinion journalism, headlines, social posts, photos—you name it—that gives you the slightest pause, please call or text me immediately,” she wrote.

That statement came after the “virtual walkout” of 300 employees last week demanding approval of opinion pieces by the paper’s “diverse staff” before publication.

Giving every employee a veto over what appears on the opinion page is not a recipe for fostering the kind of intellectually robust debates necessary to sustain democracy—especially when those same employees are intolerant of ideas firmly in the mainstream.

Even though Times employees seized on the revelation that Bennet failed to personally read the op-ed before publication, there’s simply not much of an argument that the Times failed to uphold editorial standards with the Cotton op-ed. By all appearances, the Times management is hostage to an impetuous mob enforcing a political orthodoxy.

The lengthy and argumentative editor’s note appended to Cotton’s op-ed cites no meaningful factual concerns, and instead accuses the piece of being “needlessly harsh” and says it “should have undergone the highest level of scrutiny.”

But on Friday, the same day the paper tacked the editor’s note onto Cotton’s op-ed, the paper published a column calling Cotton “fascist” in the headline.

On Saturday, the paper published an op-ed encouraging readers to text all their family members and tell them you won’t visit or speak to them until they either make financial contributions to support “black lives” or protest in the streets during a pandemic.

To recap, Cotton is a “fascist” for an argument most of the country supports, but there’s still no editor’s note explaining why the paper published a piece by a representative of the Taliban in February.

Cotton is “needlessly harsh,” but the paper published a Donald Trump assassination fantasy in 2018. Cotton’s op-ed needed the “highest level of scrutiny,” but somehow a piece urging people to tear their own families apart with accusatory political blackmail was unobjectionable.

Then, for good measure, in the Times article on Bennet’s resignation, the paper mischaracterized Cotton’s op-ed as saying the senator was calling for the use of military force against peaceful protesters. The Times then stealth-edited the article without making a factual correction.

It would be reassuring to think that the Times has an institutional culture that is uniquely politicized. However, the last week has been defined by a wide cross-section of journalists acting completely unhinged.

Saturday was the anniversary of D-Day, and NPR national correspondent Mara Liasson declared the famous battle was the “Biggest [A]ntifa rally in history.” Antifa, the black-clad gutter punks and Marxist-anarchist revolutionaries, have been denounced by FBI Director Christopher Wray for bringing violence to the recent protests.

The “anti-fascist” bona fides of the recent protests are also in doubt. The national World War II memorial in Washington was defaced in the protests last week, and the mobs in London spray-painted “racist” across a statue of Winston Churchill. (If Churchill is racist, someone might want to tell the vandals about the guy he saved us from.)

Given this context, it’s “staggering that a top NPR reporter equates the heroes of Normandy with some two-bit anarchist thugs,” declared journalist Andrew Sullivan. Speaking of Sullivan, he made it clear New York magazine would not publish his regular column last week—leading to much speculation he was being censored for wrongthink.

For its part, Slate told its readers violence is “an important tool” for protesters. Over the weekend, a Washington Post columnist, Karen Attiah, put up a tweet asking people to directly give her money for “reparations.” (She also deleted her tweet.)

When a top editor at Business Insider told its employees last week that giving money to bail funds to support the recent protests would damage the publication’s credibility, the staff revolted—never mind that at least some of that money is going to people arrested for destructive acts that undermined the message of the peaceful protesters.

Naturally, Washington Post media columnist Margaret Sullivan blessed the Business Insider staffers’ uprising. She did this in the same column where she argued against publishing Cotton’s op-ed with a tendentious comparison to publishing “the denialist views of, say, Alex Jones of Infowars on the Sandy Hook massacre.”

The New York Times isn’t even the only major paper that forced out prominent editors over the weekend. Stan Wischnowski, the top editor of The Philadelphia Inquirer, resigned days after the paper ran the headline “Buildings Matter, Too,” which the staff found offensive.

It didn’t matter that the point of the column was that buildings matter precisely because black lives matter—the urban decay that results from rioting is going to hurt America’s vulnerable African Americans.

Despite the fact Wischnowski had doubled the number of minorities on the paper’s editorial staff in the last four years, there was no forgiveness for three supposedly ill-chosen words.

No doubt the media establishment feels like it’s undergoing an anti-liberal ideological purification reminiscent of China’s Cultural Revolution. While this may cement power for activist factions within newsrooms, it also legitimizes and empowers conservatives who are openly waging war on the media establishment.

“This entire episode could not have gone better for Tom Cotton if he wrote the script himself,” concedes New York magazine’s Olivia Nuzzi. Cotton is a Trumpian populist with presidential ambitions. Being able to take credit for The New York Times’ self-immolation is quite a feather in his cap.

Meanwhile, lots of serious people aren’t responding to this crisis of legitimacy by clamoring for media reform. They’re more worried about which needed American institution will go crazy next.

“Remember all those commentators and journalists who smugly informed us that the Woke craziness and suppression of campus speech was being overhyped and it was just a few overzealous students?” asks Brookings Institution fellow and Atlantic writer Shadi Hamid. “They’ll never admit they’re wrong. But they were very, very wrong.”