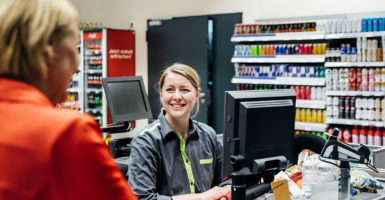 In a welcome surprise, the U.S. economy added 2.5 million jobs in May, and the unemployment rate fell by more than a full percentage point to 13.3%, Adam Michel writes. (Photo: Tom Werner/Getty Images)

In a welcome surprise, the U.S. economy added 2.5 million jobs in May, and the unemployment rate fell by more than a full percentage point to 13.3%.

Most economists had predicted the opposite, continued job losses, and soaring unemployment amid the ongoing coronavirus pandemic.

The economy has halted its free fall. This good news is a sort of Rorschach test for our increasingly partisan times.

Supporters of significant additional federal economic intervention concluded that “these numbers should make you more, not less, pessimistic about the economic outlook.”

Improving unemployment could make it harder to pass another massive spending bill, seen by some as the key to continued recovery.

The truth is, we can only learn so much from one month’s worth of jobs data. In the midst of the pandemic, there are countless new and confounding trends that we simply can’t untangle in real time.

How much of the increase in hiring is due to the Paycheck Protection Program? How much better would employment be absent the pandemic unemployment bonus, which has made it more profitable not to work than to work for as many as 3 in 4 workers?

One thing we know for certain is that more than 20 million Americans remain unemployed, and federal programs can’t maintain their economic livelihoods indefinitely.

The reversal of the unemployment trend is certainly cause for hope, and the trend reversal is even sharper when using the higher unemployment numbers following from a misclassification adjustment.

We seem to have reached the bottom of the economic crisis earlier than most thought possible.

But this reversal is not proof that the trillions of dollars of federal spending in the past two months worked, or that more spending is needed.

There is a long tradition of big-government advocates claiming new infrastructure spending or direct payments to individuals will revive the economy. More often, these “stimulus” measures destroy private-sector jobs and slow the economic recovery rather than turbocharge it.

The failures of past government efforts to prop up ailing economies are remarkably consistent. I reviewed the evidence in a recent Heritage Foundation report. The key takeaway is that history shows governments cannot spend their way into economic recovery.

Given that history, it’s unlikely that the current economic support programs are the cause of the strong employment rebound. The economic safety net Congress built over the past few months is quite different from active stimulus.

Instead, the quicker-than-expected rebound is likely driven by Americans who are ready to reengage in their communities and commercial life.

For example, more people booked stays at Airbnb between May 17 and June 3 than the same period last year, and cellphone data consistently shows people are traveling further from their homes and for more extended periods of time.

While stuck at home, many still-employed Americans didn’t abandon their plans to spend their money; they simply delayed it. In April, Americans saved one-third of their incomes, up from about 7% in January.

While not all of those savings will get spent in the coming months, a lot of it will.

The labor market changed trends earlier than predicted. We now have the opportunity to ensure the recovery will also be faster than anticipated.

The virus’ worst effects are not evenly distributed geographically or by age. As Heritage Foundation scholars Norbert Michel and Doug Badger explain in a recent report, policymakers should adapt their health interventions based on those variations, “which suggest that broad-based lockdowns are counterproductive in most areas among the non-elderly population.”

Government restrictions that are slow to respond or poorly designed threaten to stall the recovery.

May’s jobs report shows the possibility of a quicker recovery amid loosening economic restrictions and willingness of Americans to return to work, restaurants, and stores.

There’s still work to do, and the recovery will take time, but Congress should not continue to shovel money out the door.

Rather than spend billions or trillions of additional taxpayer dollars on fiscal stimulus with high costs and dubious benefits, federal and state lawmakers should focus on safely removing unnecessary restrictions that will prevent businesses from reopening, rehiring, and retooling for the challenges and opportunities in the years to come.