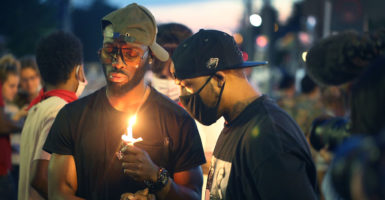 George Floyd tried “in his humblest form to show he was not resisting in no form or way,” witness Maurice Lester Hall tells The New York Times. Pictured: People visit a memorial at the site where Floyd was killed June 3 in Minneapolis. Floyd died while in police custody on May 25, after former Minneapolis police officer Derek Chauvin kneeled on his neck for almost nine minutes while detaining him. (Photo: Scott Olson/Getty Images)

George Floyd tried to defuse the situation surrounding his arrest and subsequent death, a witness of the incident said.

Floyd tried “in his humblest form to show he was not resisting in no form or way,” witness Maurice Lester Hall told The New York Times. “I’m going to always remember seeing the fear in Floyd’s face because he’s such a king.”

Floyd died May 25 after a Minneapolis police officer knelt on his neck for several minutes, footage showed. The incident has sparked protests in cities internationally.

Floyd was a friend and mentor, Hall said. The two had connected through a pastor in Minneapolis a few years ago.

Investigators are treating Hall as a key witness in the investigation of Floyd’s death. Hall fled Minneapolis shortly after the incident and hitchhiked back to Houston, where he is from. He was taken into police custody in Texas on Monday after not answering calls from police, The New York Times reported.