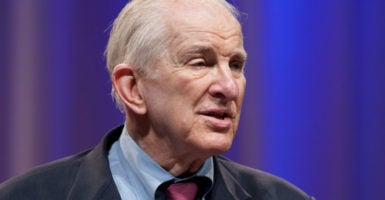 “Freedom has a taste to those who fight and almost die that the protected will never know.”

Those words were etched into the wall of the now infamous Hanoi Hilton prisoner of war camp by one of Sam Johnson’s fellow prisoners of war.

Now, they are imprinted in a handwritten note from Rep. Sam Johnson behind the dais of the chairman’s seat in the U.S. House of Representatives hearing room that bears Johnson’s name.

“I think this statement perfectly captures what it means to be a veteran,” Johnson said.

Johnson, who died of natural causes May 27 at age 89 in Plano, Texas, had a history of service to his country.

In addition to flying nearly 100 combat missions in Korea and Vietnam, Johnson endured seven years of torture in what he called “a place so dark and desolate, it could only be referred to as hell on Earth.”

“Being a veteran means having a firsthand appreciation for the freedoms so many folks take for granted. We are fortunate to live in a country that defends individual liberty for all … a country where our Founding Fathers designed a Constitution and a government that serves the people rather than dictates how people should live their lives,” Johnson said.

Johnson’s passion for defending freedom and individual liberty eventually led him to serve for 27 years in the House, following almost three decades of military service and working as a homebuilder. He represented the 3rd Congressional District of Texas from 1991 through 2018.

Some of Johnson’s greatest accomplishments in Congress came from his role on the Social Security subcommittee of the House Ways and Means Committee, where he served his entire tenure and rose to become chairman.

Johnson’s proposed Social Security Reform Act of 2016 is the only such measure that would make the program solvent without raising taxes (in fact, it would slightly lower taxes), and it would do so while actually increasing Social Security benefits for low-income earners.

With three children and 10 grandchildren of his own, Johnson was no doubt motivated to preserve Social Security without unduly burdening younger and future generations.

Amy Shuart, who served as staff director of the Social Security subcommittee under Johnson, praised the chairman and highlighted many of his other accomplishments:

For years, Chairman Sam Johnson worked to strengthen Social Security so future generations could continue to count on it. He understood the importance of Social Security to so many Americans, and challenged the Social Security Administration to always improve service to the American people—and held the agency accountable when necessary.

His leadership resulted in significant improvements to Social Security, including the elimination of the retirement earnings test for certain seniors, removal of Social Security numbers from Medicare cards, and much-needed changes to the representative payee program. His influence can be seen across a variety of agency efforts—a renewed focus on service delivery, much-needed modernization of information technology, and improved efforts to stop fraud—and will continue for years to come.

In a 2016 interview, Johnson said, “I hope that any legacy I leave behind is one that emphasizes the importance of faith, family, service, and patriotism.”

Congressman Johnson, you have certainly done that, and America thanks you for your service.