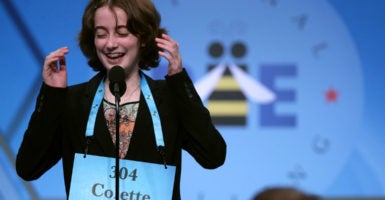 How do you spell “canceled”? Does it take one “l” or two?

According to the Merriam-Webster Unabridged Dictionary, the official dictionary of the Scripps National Spelling Bee, the preferred spelling is with one “l,” but using two is an acceptable alternative.

Either way, the annual National Spelling Bee—which was supposed to have taken place last week—was canceled, yet another casualty of COVID-19. (It was the first time since World War II that the bee had been canceled.)

But as someone who represented my home state of Maine at the National Spelling Bee when I was 14 and in the eighth grade, it’s my contention that the spelling bee is also suffering from longer-term wounds. It should use the year off to triage those.

When I took the stage at the Mayflower Hotel in Washington, D.C., where the bee was held each year back then, I was one of 73 finalists.

Over the years since, it has grown like “The Blob” of cheesy science-fiction movie fame. At the 92nd edition of the bee in May 2019, there were 562 contestants, 270 from regional bees and 292 who applied through something called the “RSVBee program.”

The bee’s organizers say the RSVBee program “allows more spellers from highly competitive areas, or those that don’t have sponsors” to participate. They say it was intended to “increase fairness,” but mostly it has increased the bee’s unwieldiness.

The upshot is, with a field of competitors that large, it has become necessary for the bee’s sponsor, media conglomerate E.W. Scripps Co., to make the list of words that contestants have to spell exponentially more difficult than they were back in my day, if only to cull the herd.

Otherwise, the bee would go on interminably. Indeed, the 2019 contest ran for five days, May 26-30. The bee I was in took just two days: After nine rounds and 464 words on Day One, 23 of us survived to see Day Two.

By the time the winner of my bee was crowned, the total number of words spelled was 571—only slightly more than the number of competitors last year.

At the 2019 bee, eight co-champions were crowned, CNN reported, “after running out of words that were challenging enough for the contestants.”

The obscurity and difficulty of the words used now are hard to exaggerate: Three from last year’s finals were “omphalopsychite” (one who stares fixedly at his navel to induce a mystical trance; i.e., a navel-gazer); “geeldikkop” (a serious disease of southern African sheep); and “auftaktigkeit” (the principle in music that all musical phrases begin on an upbeat).

Compare those with the final two words I spelled correctly to win the Maine championship—“rheostat” (a resistor for regulating an electrical current by means of variable resistances) and “terrazzo” (a mosaic flooring consisting of small pieces of marble or granite set in mortar)—or the word I lost out on by misspelling at the national finals, “risibility” (the ability or inclination to laugh).

As you can imagine, I was neither able nor inclined to laugh when the judges’ bell rang, indicating that “r-i-s-e-a-b-i-l-i-t-y” was incorrect. I’d never heard of the word before, and the definition provided by longtime pronouncer Richard Baker prompted me to think of “rise”—as in “getting a rise out of someone”—as the possible root word for “risibility”; hence, my “r-i-s-e-.”

In hindsight—which, as they say, is always 20/20—if I had thought of “visibility,” then simply changed the “v” to an “r,” I’d have remained in the running.

I finished fifth in that field of 73, but two other contestants went down immediately after me, so if I had just spelled “risibility” correctly, I’d have finished no worse than second runner-up, and perhaps … who knows?

The final word spelled by the winner that year was “interlocutory” (a plea or appeal made during the progress of a legal action). The second- and third-place finishers went out after misspelling “egalitarian” and “quoits” (a flattened ring of iron or circle of rope used in a throwing game), respectively.

Note how much easier those words were than the examples cited above from last year’s bee, the ninth spell-off to be held at the Gaylord National Resort and Convention Center just outside the nation’s capital in National Harbor, Maryland. (It was moved there in 2011 after 15 years at the Grand Hyatt Washington. That year, there were “only” 275 competitors, fewer than half as many as in 2019.)

When Scripps announced April 21 that the 2020 bee was being canceled, it initially held out hope that the competition could be postponed till later in the year. Given the uncertainty about how long the coronavirus pandemic would last, organizers opted instead to cancel it altogether.

Scripps should use the year between now and June 1, 2021, the planned start date for next year’s bee, to totally overhaul the format, which currently involves a preliminary written spelling test that you don’t even need to score 100% to proceed.

Organizers should make the national finals more like the Miss America pageant, with just one candidate from each state and from each foreign country that sends participants. Let the U.S. spellers slug it out at the state level like they did back in my day.

That way, organizers could ratchet back down the difficulty (and obscurity) of the words that contestants have to spell from their current ludicrous levels. That might be the one good thing to come of COVID-19’s cancellation (with two l’s) of this year’s bee.