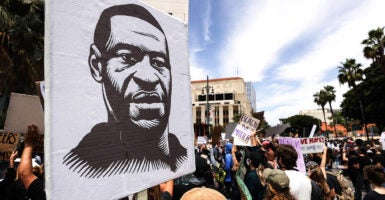 A protester holds a sign with an image of George Floyd during a peaceful demonstration over Floyd’s death outside LAPD headquarters on June 2, 2020, in Los Angeles, California. The officer who arrested Floyd, Derek Chauvin, and who proceeded to press his knee into Floyd’s neck for over eight minutes, has been arrested and charged with third-degree murder and second-degree manslaughter. But some experts are questioning if these are the most appropriate charges. (Photo: Mario Tama/Getty Images)

Derek Chauvin, the Minneapolis police officer who arrested George Floyd and proceeded to press his knee into Floyd’s neck for over eight minutes, has been arrested and charged with third-degree murder and second-degree manslaughter. Some legal experts are asking whether these are the most appropriate charges to be brought against Chauvin.

>>> Update: Minnesota Attorney General Keith Ellison announced Wednesday afternoon that the state also will charge Chauvin with second-degree murder, and that the three other former Minneapolis police officers involved are being arrested and charged with aiding and abetting second-degree murder.

Amy Swearer, a legal fellow in The Heritage Foundation’s Meese Center for Legal and Judicial Studies, joins The Daily Signal Podcast to discuss the legal implications of Chauvin’s use of deadly force against Floyd and whether the charges brought against him are correct for the crime committed.