What Do We Know About Status of Pandemic? Here’s Some Data to Put It in Perspective 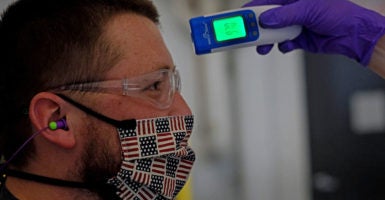 As states reopen across the country, it’s important to understand both where the COVID-19 pandemic has spread and where it is progressing or receding. To further that effort, my colleagues and I at The Heritage Foundation built a tracker that uses publicly available data to provide some basic information, on a county-by-county basis, about the disease.

By tracking case data, we can learn several basic truths about the disease. For example, we expected to find that cases would be concentrated in the most populous areas, with the East Coast hardest hit. The data bear that out.

But the tracker reveals that certain areas have seen a disproportionate amount of cases. The 30 counties registering the most deaths from COVID-19 account for 45.7% of total cases, but only 15.4% of the population. Of those 30 counties, 24 are between Philadelphia and Boston.

Pockets of concentration can be found within states as well. For example, as of May 24, Wayne County, Michigan, with only 17.5% of the state’s population, accounted for 39% of its cases.

We know that nursing homes have been ravaged by the pandemic. But the Kaiser Family Foundation notes that only 36 states report this data, and many of them fail to report case counts or provide daily updates.

Somewhere between 30% and 50% of all deaths from COVID-19 have occurred in nursing homes, so tracking this issue should be a priority. States should work to closely examine their nursing homes so resources and policy changes can be directed appropriately.

Similarly, state-level data about COVID cases in prisons is sadly lacking. The Marshall Project aggregates and tracks this data.

There are two issues here. Michigan leads in prison testing; as of May 22, it claimed to have tested every prisoner in its system. So while Michigan currently ranks high among the states in terms of prisoners testing positive for COVID-19, many states have not conducted similar testing.

Second, it is not clear how prison infection counts enter the summary data for a state. It is unclear whether staff counts are placed in the unallocated count or if it is attributed at the county level. Examining the data, it seems prison data generally is not attributed to county data.

As states reopen, we must be able to separate the effects of increased testing from the possibility of new outbreaks. For example, if a state conducts many new tests on one day, this will appear as accelerating new cases in the data and general trackers but might warrant concern. States should be encouraged to release this data alongside their county level case data to help individuals understand their current situation.

The availability of reliable county-level data will be essential as states reopen—especially for vulnerable populations. Public officials need that information to guide policy decisions on how best to protect them.

The basic case and demographic data provided by Heritage’s Tracker can help the public find information about the disease’s progress in their county and state, but it can only go so far.

Vital county-level testing data are still lacking, as are explanations for how jurisdictions treat data for some of the populations hit hardest by the pandemic. These deficiencies must be addressed.