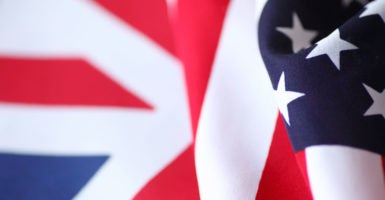 Encouragingly, both Washington and London have signaled the desire for an ambitious free trade deal to be completed this year. (Photo illustration: Alice Day/EyeEm/Getty Images)

The first round of trade agreement talks between the U.S. and the United Kingdom took place online last month, with negotiators engaged in “positive and constructive” discussions in nearly 30 different groups, covering all aspects of a comprehensive trade agreement.

Negotiators concurred that the envisioned Free Trade Agreement—which has become more critical as the two trading partners have to deal with the economic challenges posed by the COVID-19 pandemic—would contribute to the long-term health of their economies.

Both sides, which conferred May 5 to 15, reportedly are ready to “proceed at an accelerated pace.” A second round is scheduled to take place June 15 to 22, with negotiating teams continuing to meet online on a rolling basis.

Through the U.S.-U.K. trade negotiations, the Trump administration has an opportunity to reestablish momentum for liberalizing and increasing trade between like-minded and willing nations.

Currently, the United States has 14 free trade agreements with 20 countries in force, with nations from Israel to South Korea. In contrast, the U.K. had not been allowed to negotiate a single trade deal on its own since it joined the European Economic Community (now the European Union) in 1973.

Encouragingly, both Washington and London have signaled the desire for an ambitious free trade deal to be completed in 2020.

In the context of the coronavirus pandemic, it is all the more vital that the U.S. and U.K. act decisively, not only to help their own economies recover from the effects of the crisis, but more importantly, to give a boost to the worldwide cause of free trade.

More than ever, defending and advancing trade freedom is critical.

Since the British people voted in 2016 to begin a new chapter, the government has been clear that one of our priorities is to pursue an ambitious trade agreement with America. …

The U.S. and U.K. have one of the world’s best economic relationships. Trade and investment between us sustains millions of jobs on both sides of the Atlantic, but we can do even better. …

Cutting trade barriers and eliminating tariffs can reduce the cost of doing business, delivering huge gains for smaller players. Throughout the negotiations, we will prioritize small companies.

The ultimate purpose of the U.S.-U.K. free trade agreement should be to institutionalize and maximize free and open commerce between two transatlantic allies that have long enjoyed a special and close relationship.

To that end, ambition in the intended scope of the trade agreement should go together with ambition to conclude it as expeditiously as possible.