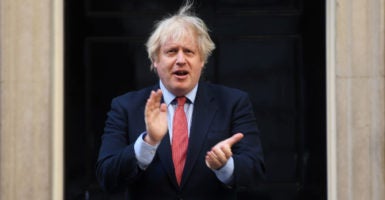 British Prime Minister Boris Johnson, pictured taking part in the weekly "Clap for Our Carers" event in Downing Street on May 28 in London, demonstrated tremendous leadership in delivering Brexit and taking the U.K. out of the European Union. He must now stand up to Beijing by ensuring that Huawei is completely removed from Great Britain’s telecommunications infrastructure. (Photo: Peter Summers/Getty Images)

It’s been a bad few days for the Communist Party-led government in Beijing in its efforts to gain economic and strategic influence in the United Kingdom and Europe.

China’s flagship technology company, Huawei, is finding that its welcome mat is being taken away in London, the world’s biggest financial center, with major implications for its global operations.

The Daily Telegraph newspaper in London reported last week that “the Prime Minister has instructed officials to draw up plans that would see China’s involvement in the U.K.’s 5G network reduced to zero” in the face of strong opposition from Parliament and the Trump administration.

That’s a complete reversal of the British government’s decision back in January to allow Huawei a 35% stake in the development of the U.K.’s 5G infrastructure.

In addition, as the BBC has noted, the U.K. government has instructed the National Cyber Security Centre to conduct a review “into the impact of allowing Huawei telecoms equipment to be used in British 5G networks.”

The Times of London revealed Friday that “Britain is seeking to forge an alliance of [10] democracies to create alternative suppliers of 5G equipment and other technologies to avoid relying on China. … The government has approached Washington about a ‘D10’ club of democratic partners, based on the [Group of Seven] plus Australia, South Korea, and India.”

These are hugely welcome developments ahead of the planned G-7 summit of world leaders at the White House, expected to be held at the end of June, as governments across the world adopt an increasingly tough stance toward China in the wake of the COVID-19 pandemic.

Huawei, a state-controlled Chinese enterprise, poses a significant national security risk to the United Kingdom and U.S. allies across the world. It’s already deeply embedded in the U.K.’s telecommunications infrastructure, and giving it a role in the development of 5G would be a hugely dangerous move.

The Heritage Foundation has been at the forefront of urging the British government against going down the path of giving Chinese companies a stake in 5G. Heritage scholars met with senior British officials in London and in Washington earlier this year, as well as with leading Conservative members of Parliament, conveying deep-seated U.S. concerns over the involvement of Huawei in Britain’s 5G network.

In a major policy paper outlining a U.S./European Economic Partnership Recovery Plan, Heritage scholars called in early May for the establishment of a transatlantic 5G consortium, as well as the building of a coalition to confront China’s “military-civilian integration.”

The United States should work with its European partners to create a consortium of governments and industries aimed at rapidly developing alternatives to China’s 5G offerings.

Among other things, this group should develop strategies for mutually supporting core 5G technologies within the transatlantic alliance, securing existing and future telecommunications networks against hostile foreign governments, and diversifying supply-chain dependence on China.

British Prime Minister Boris Johnson demonstrated tremendous leadership in delivering Brexit and taking the U.K. out of the European Union.

He must now stand up to Beijing by ensuring that Huawei is completely removed from Great Britain’s telecommunications infrastructure. As U.K. Foreign Secretary Dominic Raab recently declared, it can no longer be “business as usual” in dealing with China.

The United States and its allies must resist China’s efforts to undermine the free world, and strengthen the transatlantic alliance in the face of its adversaries.

The U.K. is leading in Europe in standing up to China. Other countries across the Atlantic must follow the British example.