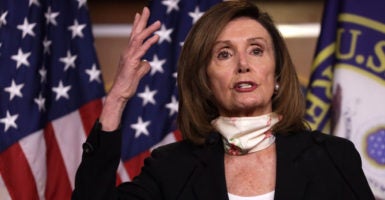 We have been reminded in this time of pandemic that necessity is the mother of invention.

People have modified many regular activities. They’ve gone to telework and contactless delivery and even virtual church services. And now the House of Representatives has adopted a resolution that, for the first time, no longer would require members to show up to vote.

That resolution is being challenged in a court case filed on behalf of House Minority Leader Kevin McCarthy, R-Calif., 20 other Republican House members, and four of their constituents.

Much of Congress’ work takes place off the House or Senate floor. Committees even hold field hearings around the country, and members spend time in their states or districts. But since the House and Senate were established in 1789, their members have shown up to take official votes.

No crisis ever has changed that commitment. Not when the Capitol was burned to the ground during the War of 1812, not the Civil War, not the Spanish flu pandemic of 1918, or even the 9/11 terrorist attacks.

Nonetheless, on May 15, the House voted 217-189 to adopt House Resolution 965, which authorizes the speaker to designate a period during which one member may cast a vote for, and even “record the presence of,” up to 10 other members.

This attempts to change both of the fundamental features of how any legislative body operates. A majority of members must be present to transact business, and a majority of those present are required to take action.

The Congressional Research Service has declared this principle applies to Congress. In one report, it stated that “the Constitution requires that a quorum, or a simple majority of the Members, is to be present on the floor when the House of Representatives transacts business.”

And in another publication, it declared that the “text of the Constitution clearly envisions the House and Senate meeting and voting in person.”

This is Legislative Procedure 101, and it should have been enough to prevent something this radical.

But there’s more. A report by the House Rules Committee Democratic staff, dated March 23, conceded that this would be “one of the biggest rule changes in the last century” and would “raise serious security, logistical, and constitutional challenges.”

This “novel method of voting” has “no parliamentary history or basis.” It would require “major changes to foundational House rules” and “almost certainly cause unintended consequences.”

The report concluded: “While arguments can be made in favor of its constitutionality, to avoid a court challenge, it is inadvisable to use unprecedented parliamentary procedures on critical legislation.”

The report even outlined other ways to conduct House business in response to the pandemic. It said the best option was to proceed under “existing House rules and current practice,” which explicitly prohibit proxy voting.

But those concerns and alternatives from its own staff fell on the deaf ears of the House majority leadership.

Hours after adopting this resolution, they used those “unprecedented parliamentary procedures” to pass the HEROES Act, a $3 trillion monstrosity that is a far-left shopping list masquerading as a coronavirus relief bill.

The court challenge that this report warned of and that was filed May 26 outlines the many provisions of the Constitution that explicitly or implicitly require that members be present for the House to do business.

Using unambiguous words like ‘meeting,’ ‘assemble,’ ‘attendance,’ ‘present,’ ‘absent,’ ‘recess,’ ‘sitting,’ and ‘seat,’ the Constitution clearly requires Members of Congress to be actually present in the House or Senate chamber to be counted as part of the quorum necessary for either House to do business and to cast their votes from the floor. Other words that appear throughout the Constitution, such as ‘adjourn’ ‘preside,’ and ‘quorum,’ likewise bespeak, especially when viewed in context, the Framers’ understanding of the House of Representatives and the Senate as deliberative bodies, where the People’s representatives would gather together, face to face, to debate and address the issues of the day. Numerous provisions embody this understanding.

The complaint then delineates the many provisions of the Constitution that require members be present for the House to do business.

The challengers contend that in light of these provisions, “there can be no serious dispute that the Constitution does require Members of Congress—Senators and Representatives—to assemble in person if they are to be counted as present toward the Quorum Requirement contained in Article I, Section 5 or if they are to cast a vote from the floor of either House.”

The primary response will be that the Constitution gives the House and Senate authority to “determine the Rules of its Proceedings.”

That is true, as far as it goes. But as the Supreme Court unanimously held in United States v. Ballin (1892), neither the House nor Senate may “by its rules ignore constitutional restraints.”

In this current controversy, this lawsuit seeks to answer whether this exercise of the House’s rule-making authority is constitutional. Until this issue is resolved, the validity of any laws passed using this new rule will be subject to doubt.

Some might point to the practice of proxy voting in legislative committees, but that practice does not support what House Democrats have done.

In the Senate Judiciary Committee, for example, members must be physically present to establish a quorum and, although proxy votes are recorded for the committee record, they do not count in the tally when the committee reports bills or nominations to the full Senate.

This new House rule creates the strange situation of establishing a quorum by counting members as present who are, in fact, absent. It allows the House to do business with as few as 20 members present, with each controlling the votes of 10 others.

The only reason to attempt something so radical is the fear of failure under the traditional legislative practice that the Constitution requires and Congress has always followed.