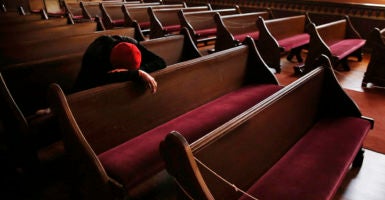 Mario Carvalho prays inside the Blessed Sacrament Chapel attached to the Cathedral of the Holy Cross in Boston, which has roped off pews to cut down on the number of people who can be inside at one time, part of a social distancing measure during the COVID-19 or pandemic. Gov. Charlie Baker has allowed places of worship to open in the state's first phase of its reopening plan. (Photo: Jessica Rinaldi/The Boston Globe/Getty Images)

President Donald Trump stepped up to declare houses of worship “essential places that provide essential services” to the American people.

“The governors need to do the right thing and allow these very important, essential places of faith to open right now for this weekend,” he said.

The president raised eyebrows by declaring that he will “override” governors if they don’t do it.

Where’s the president’s authority to override governors on this matter?

I’m not a constitutional attorney, but I do have common sense.

The president takes an oath of office during which he swears to “preserve, protect and defend the Constitution of the United States.”

The First Amendment of our Constitution protects the right to “free exercise” of religion.

Is it complicated during a difficult time like this when governors have a responsibility to manage the health and welfare of the citizens of their state? Of course it is.

Is it reasonable for Trump to categorize religious services as “essential”?

I have been writing for weeks that the COVID-19 crisis is highlighting the same conflicts we’ve been dealing with as a nation all along.

My guess is California Gov. Gavin Newsom, who, as mayor of San Francisco, paved the way for the legalization of same-sex marriage, does not at all believe houses of worship provide essential services.

I don’t question that he understands that religious freedom is protected by our Constitution. But I certainly doubt he believes in his heart that church attendance is “essential,” and he probably thinks going to the mall or the beach is more essential.

We’re dealing with a core conflict in America today. How vitally important is religion?

In the 1830s, French nobleman Alexis de Tocqueville traveled across the still-youthful America to try to understand what was happening and what was driving the remarkable success of the young nation.

He recorded his thoughts in “Democracy in America,” which many believe to be the greatest book ever written about our nation.

Here’s what he wrote:

According to a 2018 Gallup survey, 51% of Americans said religion was “very important” in their life. But when Gallup first asked the question, in 1952, 117 years after Tocqueville published his book, 75% said it was “very important.”

Although the sense of the importance of religion is still quite strong in America, it has weakened. With that weakening, we’re seeing a weakening of behaviors that keep a nation strong: record lows in the rate of marriage and the number of children born.

Also, according to a Kaiser Family Foundation poll, 45% say that the coronavirus crisis has had a negative impact on their mental health. This could be tied to a weakening of faith.

Leadership is about staking out principles and standing by them. Trump ran for president to “Make America Great Again.” He is exercising leadership by declaring religion and church attendance essential to American greatness.

The president is right to defend the constitutional protection of religious practice and to identify the freedom to worship as essential.