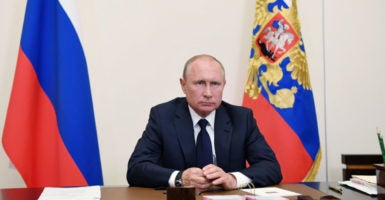 we can expect Russia to ramp up anti-U.S. propaganda in the coming weeks that blames the United States for the demise of Open Skies, but the U.S. government, the American public, and our NATO allies and partners cannot buy into it. Pictured: Russian President Vladimir Putin addresses the nation via teleconference at the Novo-Ogaryovo state residence outside Moscow on May 11, 2020. (Photo: Alexy Nikolsky/Sputnik/AFP/Getty Images)

When making foreign policy decisions, one must be careful not to view the world prescriptively (the way we want it to be), but rather to view it descriptively (the harsh reality of what is).

After President Donald Trump announced May 21 that the United States would withdraw from the 1992 Treaty on Open Skies, many jumped to accuse the president of taking another step to dismantle a stable world order where relationships with U.S. adversaries are fine and dandy, and any international security agreement has independent value.

Fortunately, the Trump administration identified the harsh reality: While Open Skies can indeed benefit the United States by enabling imagery intelligence collection on relatively short order and by easing information-sharing with allies, regrettably, years of Russian violations and abuse of the treaty have become too grave to continue turning a blind eye.

Russia has denied the United States and its allies observation flights over key military sites, which not only violates the treaty, but also defeats its very purpose of instilling confidence and security among parties to the treaty.

Russia has also exploited the treaty for its own hostile and revisionist purposes, including to collect information to target U.S. civilian infrastructure and to justify its regional aggression against the sovereign states of Ukraine and Georgia.

After years of Russian violations of not only Open Skies, but nearly every other international agreement to which Russia has been a party, such as the Intermediate-Range Nuclear Forces Treaty, the Trump administration is correct to finally take a stand and show Russia and the world that such behavior will have consequences.

So, what does this mean for U.S.-Russian relations?

Far from the notion that withdrawing from Open Skies begins a retreat to a spiraling arms race, the decision can place the United States on stronger footing for future arms control negotiations.

It’s first worth noting that the administration has made clear that should Russia return to full compliance with the Open Skies Treaty, the United States might reconsider withdrawal. After all, trust- and confidence-building agreements like Open Skies can indeed be stabilizing—when all parties comply.

But more significantly, withdrawing from Open Skies can strengthen the U.S. position in renegotiating the New Strategic Arms Reduction Treaty (START) with Russia, an agreement that limits U.S. and Russian deployed nuclear warheads and delivery systems and which is set to expire in February 2021.

Russia has taken advantage of New START’s flaws by developing a robust capacity to upload more nuclear warheads to its missile arsenal, growing its unconstrained stockpile of nuclear weapons to use on the battlefield, and developing new delivery systems not covered by New START.

Trump has also made it clear that the next arms control agreement must include China, which has been pursuing freely an unconstrained nuclear triad and warhead arsenal.

Withdrawing from Open Skies in response to Russian noncompliance and abuse demonstrates the very real fact that the United States will walk away from New START negotiations if we do not get what we want, which includes help from the Russians in bringing China into a trilateral arms control agreement.

Considering that the Russians have repeatedly offered to extend New START, it’s becoming increasingly clear that the United States can gain the upper hand in negotiations.

But to reap the benefits of a strengthened negotiating posture, the United States needs to do two things.

First, we can expect Russia to ramp up anti-U.S. propaganda in the coming weeks that blames the United States for the demise of Open Skies, but the U.S. government, the American public, and our NATO allies and partners cannot buy into it.

Russia has become adept at rampantly spreading misinformation that accuses the United States of breaking down arms control agreements, even though viewing the world descriptively reveals Russia’s penchant to cheat and exploit.

Republicans and Democrats alike should unite around the correct narrative depicting that behavior.

Second, the United States must stick to its nuclear modernization plan.

Any cuts to nuclear recapitalization programs such as the Ground Based Strategic Deterrent or plutonium pit production would hinder U.S. leverage and help ease Russian and Chinese worries about U.S. capabilities that induce them to negotiate in the first place.

By taking real action against Russian violations and abuse of international security agreements, the Trump administration has demonstrated that it does not view the world through rose-colored glasses.

All can agree on the goal of forming verifiable confidence-building agreements, but doing so requires negotiating from a position of strength.

Hopefully, an exit from Open Skies, if necessary, will prove to Russia, China, and the rest of the world that when it comes to effective arms control and other security agreements, the United States means business.