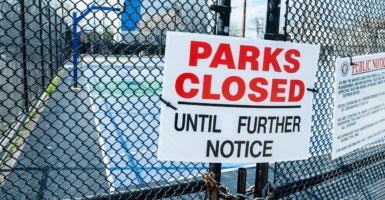 As states across the country begin the process of reopening, Americans continue to battle over the methods governors and local authorities have used to tackle the coronavirus pandemic.

For instance, some Americans have been pulled over and ticketed for merely driving, hardly an activity that is likely to spread disease.

One Pennsylvania woman received a $200 ticket for violating Gov. Tom Wolf’s statewide stay-at-home order when she said she had merely gone on a drive to relieve her quarantine restlessness, according to the York Dispatch.

If anything, driving in your own car is a far better method to prevent spreading COVID-19 than, say, using public transportation.

As former California state Rep. Chuck DeVore wrote for The Federalist, states with a higher amount of mass transit generally have had a higher number of COVID-19 cases than other states, even taking into consideration urban density. Perhaps we are lucky that the Green New Dealers didn’t get their wish to end car and air travel and force Americans to switch to rail.

Parks around the country have been shut down, which has rankled many Americans who now struggle to find an outdoor sanctuary at a time when most are trapped inside.

Mental health, after all, is a serious concern, as so many people are trapped inside and struggling financially.

“In the short run, closing parks may seem prudent, when our hospitals are overrun and we are trying so hard to curb the spread of COVID-19,” Zeynep Tufekci wrote April 7 in The Atlantic. “But in the medium to long run, it will turn out to be a mistake that backfires at every level. While it’s imperative that people comply with social-distancing and other guidelines to fight this pandemic, shutting down all parks and trails is unsustainable, counterproductive, and even harmful.”

And some park crackdowns have been utterly absurd. For instance, police in Brighton, Colorado, arrested a former trooper with the Colorado State Patrol for playing catch with his daughter in a park.  The police department later apologized.

Even when outdoor spaces are open, some rules for how to use them have seemed senseless or arbitrary.

“For your daily dose of things that are stupid, here ya go,” Crenshaw said of the rules on his Facebook page. “How many geniuses sat around and deliberated over these particulars?”

These may be petty tyrannies and useless regulations rather than serious violations of fundamental rights, but New York Times columnist Ross Douthat was correct when he noted that it’s important to catalog these cases “because petty tyrannies today are obstacles to the adaptation we need to get to semi-normalcy tomorrow.”

Americans are unlikely to tolerate, for long, nonsensical rules or enforcement policies that impede their day-to-day lives. It was, after all, a long chain of large and small abuses by governmental authorities that led to the creation of this country. And given the Constitution and remarkable political system created from it, we have a great deal of power to end abusive laws quickly.

“But the Constitution is not suspended in times of crisis,” the attorney general said. “We must therefore be vigilant to ensure its protections are preserved, at the same time that the public is protected.”

New York City Mayor Bill de Blasio, a Democrat, has been all over the map on his response to the coronavirus. Initially, de Blasio downplayed the threat, then went to the other extreme and demanded that the Trump administration send the “military” to New York to help deal with the crisis.

Just a few weeks before Easter and Passover, de Blasio warned that religious gatherings could be a violation of New York City’s stay-at-home order. He then said that any violation of the order could lead to a “permanent” closure of religious institutions.

“A small number of religious communities, specific churches and specific synagogues, are unfortunately not paying attention to this guidance even though it’s so widespread,” de Blasio said at the March 27 briefing.

“[Law enforcement] will inform them they need to stop the services and disperse,” de Blasio said. “If that does not happen, they will take additional action up to the point of fines and potentially closing the building permanently.”

Kristen Waggoner, senior vice president of the U.S. legal division for Alliance Defending Freedom, a nonprofit devoted to defending religious liberty, wrote in the New York Daily News that permanently shutting down religious institutions would be a violation of the law.

“Neither de Blasio nor any other officials have the constitutional authority to permanently close churches and synagogues,” Waggoner wrote. “The government cannot permanently ban the practice of fundamental rights—the freedom to exercise religion included.”