Why Are Millennials the Least Entrepreneurial Generation Since WWII? 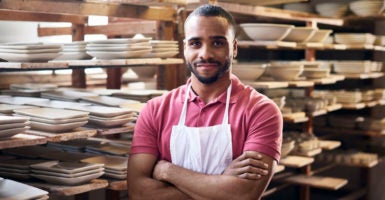 Although more than 60% of millennials desire to own a business sometime, few do. (Photo: 10'000 Hours/Getty Images)

It used to be that starting a small business was seen as the way up to wealth, or at least middle-class respectability.

Nearly half (49.7%) of American World War II veterans started their own small businesses, and it became natural and admirable for the nation’s young men to go from uniform to financial independence.

Through their endeavors, millions of Americans got employed, and this country became the entrepreneurial powerhouse of the world.

We don’t live in that world anymore.

Testimony before the Senate Committee on Small Business and Entrepreneurship four years ago indicated that less than 4% of 30-year-old millennials report being self-employed/entrepreneurial—a stark decrease from 5.7% of Gen Xers and 6.9% of baby boomers when they were the same age. From 1977 to 2013, startups as a share of all firms fell from 16.5% to 8%.

Why is that? In an age of more access to information than ever, in an age when personal branding has overtaken the millennial generation and the youngest generation lives in a luxury of technology, why are they not creating businesses left and right?

First, with the Great Recession, and now COVID-19, millennials can’t seem to catch a break—or so the thinking goes.

Most millennials came out of school to find their job prospect severely reduced by the Great Recession. Although the economy has since recovered from that, many millennials were left psychologically scarred with feelings of financial insecurity and instability.

People who feel financially out of place don’t tend to take huge risks with their lives or careers, but tend to overvalue their present securities, which explains why millennials make up about 43% (by far the largest percentage) of what Harvard Business Review describes as “work martyrs.” Those are people obsessed with their jobs and with proving themselves valuable to their employers.

This prevalence of workaholism—but lack of “venturism” into entrepreneurship—reflects what former presidential candidate Andrew Yang calls “attitudes of scarcity,” which is a belief in the contracting nature of the world and the increasingly limited supply of opportunities to succeed.

Yang writes in his book “The War on Normal People” that it “turns out that depressed, indebted, risk-averse young people generally don’t start companies.”

Those low-grade, depressing attitudes about the state of reality are unique in the sense that they seem to extend across races, classes, and sex, with more than half of millennials reporting leaving a job at least partially due to mental health and anxiety.

But the question remains: Why the sour outlooks, even during the times of economic boom?

Due in varying degrees to parenting, media consumption, and the exploits of “elite” companies themselves, our nation’s brightest young people, who should be natural business leaders and innovators, are instead being nearly unanimously driven into one of a very few ruthlessly competitive professions and industries that generate a ton of profits, but come at sacrifices of backbreaking hours and narrowly tailored definitions of “success.”

Tesla CEO Elon Musk is right when he said last week that “too many smart people go into finance and law.” According to Manhattan Prep, 91% of the most selective college graduates invariably flock to six professions—finance, tech, medical school, law school, consulting, and grad school.

“Elite” firms, such as investment banks, consultancies, and the like also heavily target elite schools, interviewing hundreds of applicants at a select few schools—for reasons most often related to prestige and connections, rather than true merit, while largely ignoring others.

That in turn ironically only heightens the social anxiety ambitious young people feel about getting into elite schools and working daunting hours at elite firms.

That’s why although more than 60% of millennials desire to own a business sometime, so few do. The best and brightest talent too often cling to their high-paying, elite jobs, rather than venture out and make something of their own.

Say what you want about how big those firms are, but they still only represent a tiny slice of what America and American success looks like. Yet, this generation grew up with movies like “Legally Blonde,” “The Social Network,” and “The Wolf of Wall Street,” movies that constantly market to us the glamour and hedonism of elite jobs.

On the other hand, few of us can name a single movie released recently that shows us the honor of starting a small business.

Finally, our parents are not off the hook, either. In the age of luxury parenting, they often gain value from their kids, based on the perceived status that eventually accompanies the child. That’s why we have grotesque scandals involving the bribing of college admissions officers and extracurricular activities designed to build networks and resumes, rather than skills.

It also raises fragile “do not touch” children who lack the self-confidence to go out on their own.

But you don’t need an elite education to start a business. You don’t even need a crazy tech idea.

An overwhelming majority of the businesses created in America—89%—have fewer than 20 employees. Those are ice cream shops, hair salons, plumbing services, and whatever else is in demand today.

They were started by people from all classes and places. The distinction is that those businesses don’t exist to serve a country or the world, like Google or Facebook or Goldman Sachs. They exist to serve a local community, one with which the business owner has a special bond.

But those ties of community are breaking down in young people. Some 30% of millennials report feeling always or often lonely, while 27% say they have no close friends. We don’t even say “hi” to our neighbors.

A side effect—or, some would argue, the main effect—of globalization is that local communities are often ignored or abandoned.

For the sake of this country’s health and economic robustness, this is not a good thing. This country’s small towns and incipient cities were built on small businesses. Removing the incentive to stay and build something for one’s neighbors will only hasten the decline and hollowing out of this country’s economic base.

What kind of solutions do we have to reverse this flight of young people from entrepreneurship?

It must start in the home. Our young people are marketed a linear set of options for success. Our parenting culture needs to improve our messaging to focus on the wealth of opportunities we have to go back to school, to find a new job, and to have the willingness to fail and then succeed.

Instead of aimlessly pursuing whatever “the next thing” is, such as the automatic track of students going to college immediately after high school with no plan for how to use their degree, we should emphasize that our young people first should come up with a long-term plan, and then decide on the best avenues to pursue their vision.

We also need to restore our young people’s faith in this country. America-hating public school curriculums and the destruction of respect for our nation’s entrepreneurial history have already shell-shocked our young people into jaded cynicism for American ideals. People who are distrustful of this country tend not to want to invest in it.

We need to reject the idolization of status. Instagram creates people who spend inordinate hours of their days crafting personal brands—but have no substance to back it up. By contrast, business owners, in an effort to create the best possible product, have to deal with failure and the potential for losing social status and position. They have to soldier on.

We have to teach our children to value truly helping people—instead of gaining followers. A brand is not a business. We have to venture out into the world and create something someone else actually wants to make a business.

These are the classic values of entrepreneurship that are not being emphasized to our next generation. It will take a revolution in culture and thought to bring them back.