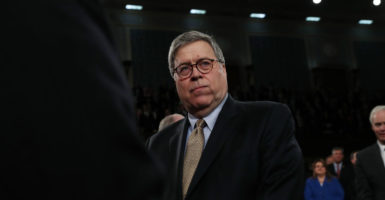 Attorney General William Barr, pictured at the State of the Union on Feb. 4, recently wrote, "Even in times of emergency, when reasonable and temporary restrictions are placed on rights, the First Amendment and federal statutory law prohibit discrimination against religious institutions and religious believers.” (Photo: Leah Mills/Reuters/Pool/Getty Images)

Feeling tired? Worn out? Getting cabin fever after being stuck inside for the past two or three months?

As many states move to reopen, in the coming weeks you likely can begin to return to work, go out to eat, or even go to a bar.

Unfortunately, do you know what you still can’t do in some of these states?  Go to church. At least not in California and Minnesota.

Regardless of their intentions, states that are restricting in-person religious services more aggressively than other, similarly situated in-person gatherings are acting unconstitutionally.

Attorney General William Barr highlighted that problem late last month when he issued a memo, “Balancing Public Safety With the Preservation of Civil Rights,” to all 94 U.S. attorneys and the head of the Justice Department’s Civil Rights Division, urging them to be on the lookout for violations of citizens’ constitutional rights—especially citizens’ First Amendment rights.

He emphasized that “even in times of emergency, when reasonable and temporary restrictions are placed on rights, the First Amendment and federal statutory law prohibit discrimination against religious institutions and religious believers.”

In a separate memo, he made clear: “Religious institutions must not be singled out for special burdens.”

Yet, it’s clear that’s exactly what some states, among them California and Minnesota, have done. As a result, Eric Dreiband, the head of the Justice Department’s Civil Rights Division, sent a letter earlier this week to California Gov. Gavin Newsom highlighting his concerns with California’s plan to reopen.

While Dreiband recognized that Newsom and other governors are facing an unprecedented task in balancing competing interests while moving to reopen their states, he reiterated Barr’s position that “there is no pandemic exception to the U.S. Constitution and its Bill of Rights.”

Specifically, he highlighted that both California’s stay-at-home order and its four-stage plan to reopen treat religious groups unfavorably.

The stay-at-home order, he said, “facially discriminates against religious exercise.”

“California has not shown why interactions in offices and studios of the entertainment industry, and in-person operations to facilitate nonessential ecommerce, are included on the list as being allowed with social distancing where telework is not practical, while gatherings with social distancing for purposes of religious worship are forbidden, regardless of whether remote worship is practical or not,” Dreiband wrote.

The four-stage reopening plan, he said, has an “[e]ven more pronounced unequal treatment of faith communities.”

Specifically, he wrote, “Places of worship are not permitted to hold religious worship services until Stage 3. However, in Stage 2, schools, restaurants, factories, offices, shopping malls, swap meets, and others are permitted to operate with social distancing.”

So, if you’re searching for a good deal at the flea market, that’s OK. Communing with God and your fellow believers, not so much. The Justice Department got it right. That likely violates one of our most fundamental freedoms under the Constitution.

Regrettably, California isn’t alone, and in fact, it looks like a bastion of religious liberty compared with some other states, notably Minnesota. There, Gov. Tim Walz’s orders allow malls, pet groomers, restaurants, bars, and even casinos to begin reopening. But not churches

We can only assume—and hope—that a letter from the Justice Department to Minnesota’s governor will be issued in short order. Until then, Catholic and Lutheran churches in Minnesota have taken steps to safely and responsibly resume in-person services despite the governor’s edict against them and other religious institutions.

While it’s always prudent to proceed cautiously when contemplating undertaking acts of civil disobedience such as this, this may be one of those rare instances where such actions are warranted.

While a lawsuit seeking a temporary restraining order against the governor’s actions—like the successful one brought by Kentucky parishioners against Louisville city officials—might have been preferable, it’s clear that religious leaders have thoughtfully weighed their options and tried to engage with the governor before taking these steps to safely reopen.

In fact, in his letter to the governor, the Catholic archbishop of St. Paul and Minneapolis told him that “[w]e do not take this step lightly” and that they “sought all along to engage you and your administration in a proactive way, and continue to be willing to do so.”

Additionally, the archbishop highlighted that the governor “seems to have taken a step backward, imposing an explicit prohibition on faith-based gatherings where none had existed.”

Given all of this, is the governor really going to send in police officers to arrest priests and parishioners who are practicing the same, or similar, social distancing policies as those sitting at craps or blackjack tables?

If so, sign me up to personally deliver the Justice Department’s letter to Walz.

While it’s unfortunate that some faith communities are not receiving equal treatment at the hands of government officials, it’s heartening that Barr and the Justice Department are working to protect the fundamental rights of American citizens and to rectify this unequal treatment.

Even more heartening is the fact that in the face of a pandemic, America’s religious communities continue to be vibrant, providing light even during these otherwise dark times.