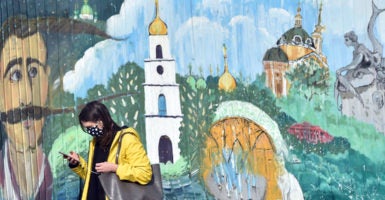 A young woman wearing a face mask, amid concerns over the spread of COVID-19, uses her smartphone while walking past a fence decorated with graffiti depicting Kyiv sights on a warm spring day in the Ukrainian capital March 27, 2020. (Photo: Sergei Supinsky/AFP/Getty Images)

“Fake news in countries with established democracies are equal to weapons of mass destruction,” Ivan Bakanov, head of the Security Service of Ukraine, or SBU, wrote in a report to Ukraine’s parliament.

“A hybrid war continues against Ukraine, while we continue to repel information attacks coming from the Russian Federation,” Bakanov wrote.

In Ukraine, Russian military forces have combined World War I and II–era weapons and tactics—such as artillery bombardments, tank attacks, and trench warfare—with weapons unique to the 21st-century battlefield, such as cyberattacks and sophisticated social media propaganda campaigns.

“Social media platforms enabled Russia’s Ukraine campaign, and aided materially in the realization of its military’s adoption of information warfare doctrine,” according to the U.S. Senate’s October 2019 report on Russia’s use of social media as a weapon.

Thus, in the eyes of Ukrainian security officials, the internet has become as much of a battlefield as the trenches in the Donbas.

Ukraine was VK’s second-largest market after Russia. Prior to the 2017 ban, about 12 million Ukrainians used it each month—representing roughly 29% of Ukraine’s overall population.

Also included in the 2017 ban were Russia’s top search engine, Yandex, and the Mail.ru email service. So, too, was Odnoklassniki, a Russian social media site, which counted 5 million monthly users in Ukraine.

According to Ukrainian security officials, the social media ban reduced the number of Ukrainians using VK and Odnoklassniki by some 70%.

Ukraine’s Russian social media quarantine spurred pushback from the millions of Ukrainians who used those sites for their businesses and for social reasons. But Ukrainian officials said Russian security agencies were using the sites as part of Moscow’s ongoing information war against Ukraine.

Apart from the ongoing combat in the east, life in Ukraine took a step toward returning to normal last week.

After two months of a national lockdown to stop the spread of the coronavirus, officials eased some restrictions May 11. All parks are now open. Restaurants opened outdoor, terrace seating—with respect to social distancing guidelines. Barbershops and nail salons were allowed to reopen. So, too, were certain retail stores.

Up to eight people are allowed to gather while outside—up from the previous limit of two. Wearing face masks while outside remains mandatory, but hardly anyone obeys the rule.

According to this correspondent’s anecdotal observations, the overwhelming majority of pedestrians on Kyiv’s sidewalks and in its parks last week were not wearing masks.

Further lockdown easing is expected Friday. But the ongoing economic toll of the restrictions has spurred many Ukrainians to push for an expedited return to normality.

In particular, after a week of severe traffic jams in Kyiv’s city center, pressure mounted to reopen the city’s underground metro. Kyiv city officials now say the metro may be reopened for limited use by Monday.

“Kyiv, like many other cities across the country, started introducing relaxation of restrictions,” Kyiv Mayor Vitali Klitschko said Thursday, addressing the metro’s reopening.

“But I’d like to appeal to Kyiv residents: Those who can work remotely so far, please continue doing that, because it is safer for your health.”

“The activity of the Russian special services and the intelligence networks under their control is currently increasing. They try to use any information to cause chaos and panic,” the SBU reported on its website.

Since the start of coronavirus quarantine in March, the SBU reportedly has blocked some 2,300 internet communities with a total audience of more than 980,000 users.

The security agency also reportedly launched 16 criminal cases against those it said had spread false information online as part of a Russian disinformation operation.

Ukrainian law makes it a crime to spread false information online that “may cause panic or disturbance of public order.”

Bakanov, the SBU’s head, said extending the 2017 social media prohibitions was an essential move for maintaining Ukraine’s national security—as well as to contain the coronavirus outbreak.

“This will protect our citizens from fake news and manipulation, and accordingly, we will maintain the security of the state in general,” Bakanov wrote in the report to Ukraine’s parliament in which he advocated the extension of the ban on Russian social media.

As of Friday, Ukraine had reported 17,330 COVID-19 cases and 476 related deaths. On Thursday, for the first time since the pandemic began, COVID-19 recoveries in Ukraine outnumbered new cases.

By Friday, Russia had reported a total of 263,000 COVID-19 cases and 2,418 related deaths. However, many experts say Russia’s actual numbers are likely higher.

Outside the Donbas, the rest of Ukraine is relatively untouched by the war. The effects of combat extend out from the contact line only as far as the range of the weapons being used. It truly is a quarantined conflict.

But there’s another, hybrid war going on in Ukraine that affects the entire country.

In September 2014, American Gen. Philip Breedlove, then NATO’s top commander, called Russia’s hybrid war effort in Ukraine “the most amazing information warfare blitzkrieg we have ever seen in the history of information warfare.”

Apart from its weaponization of social media against Ukraine, Russia’s cyberattacks have hit Ukraine’s water supply systems, the banking system (shutting down ATMs), the largest international airport, and the electoral process. In December 2016, a cyberattack, which Ukrainian officials attributed to Russia, took down one-fifth of Kyiv’s electrical grid.

As Russian shells and rockets rained down on them in the front-line town of Debaltseve in February 2015, Ukrainian troops began to receive curious, anonymous text messages on their cellphones.

The messages claimed that Ukraine’s then-president, Petro Poroshenko, and Ukrainian military commanders had “betrayed” their soldiers.

The Ukrainian military later concluded that Russian military forces had taken over the local cellphone network with mobile jamming stations, and the text messages were part of a psychological operation against Ukrainian troops.

“Fake news is a real weapon,” Viktor Kovalenko, a former journalist and a Ukrainian army veteran of the battle for Debaltseve, told The Daily Signal.