Barr Says Obama, Biden Are Not Under Criminal Investigation 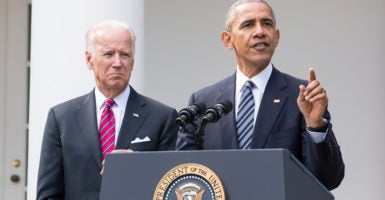 “As to President Obama and Vice President Biden, whatever their level of involvement, based on the information I have today, I don’t expect Mr. Durham’s work will lead to a criminal investigation of either man,” Barr said at a press conference.

He added: “Our concern over potential criminality is focused on others.”

Trump and some of his allies have suggested in recent weeks that Obama and Biden broke the law during the course of the FBI’s investigation of the Trump campaign.

Biden submitted one of the so-called unmasking requests on Jan. 12, 2017.

U.S. officials routinely make unmasking requests. But Trump supporters have alleged that the requests are evidence that the Obama administration targeted Flynn. Republicans have focused on the Flynn unmaskings because a senior U.S. government official leaked classified details of Flynn’s call with Russia’s ambassador to The Washington Post on Jan. 12, 2017.

Biden has not said why he made the request for the report that identified Flynn.

Barr did not say whether Durham has investigated the Flynn unmasking requests.

“I have a general idea of how Mr. Durham’s investigation is going. As I have indicated, some aspects of the matter are being examined as potential crimes,” said Barr.

“Not every abuse of power, no matter how outrageous, is necessarily a federal crime.”

Barr says he does not “expect” that the ongoing review of the Trump-Russia probe will lead to a criminal investigation of Barack Obama or Joe Biden: “Our concern over potential criminality is focused on others” https://t.co/HcJ4ge7ZNj pic.twitter.com/N7F0WvaeFE

“As long as I’m attorney general, the criminal justice system will not be used for partisan political ends. This is especially true for the upcoming elections in November.”

The inspector general found that the FBI made 17 “significant” errors and omissions in applications to obtain surveillance warrants against Carter Page, a former Trump aide.