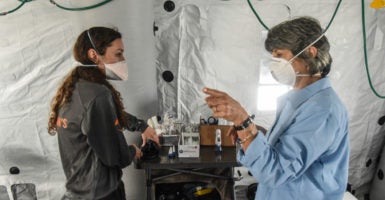 People set up hospital beds in an emergency field hospital, affiliated with Samaritan's Purse, to aid in the COVID-19 pandemic in Central Park on March 30, 2020, in New York City. (Photo: Stephanie Keith/Getty Images)

Just as soon as the Christian organization Samaritan’s Purse came to the aid of overwhelmed New York City officials and sick residents struggling to combat the effects of COVID-19, New York City Council Speaker Corey Johnson decided the diverse, “tolerant,” progressive city had enough of its assistance, due to its Christian foundation, and effectively kicked the charity out.

While it’s usually Christians who are scolded for their so-called intolerant beliefs that are rooted in centuries-old religious traditions, here it seems like it’s progressives who aren’t so tolerant of other people embracing views that are different than theirs—even if those very views inform their acts of charity and medical care.

Samaritan’s Purse is, of course, a renowned Christian relief organization that focuses mostly on offering medical aid in times of crises, setting up emergency field hospitals in disease-ridden, war-torn, or terrorist-ravaged hot spots around the world.

It has gone everywhere from the Bahamas to Mozambique to Iraq and has treated everything from injuries caused by ISIS to Ebola. Now, it’s helping COVID-19 patients and public officials in New York and Italy.

When COVID-19 began to overwhelm New York City just a few weeks ago—at the peak of what we now think was the frightening “curve” of the outbreak—Samaritan’s Purse arrived, built a giant tent hospital in Central Park with the full knowledge and cooperation of the nearby highly acclaimed Mount Sinai Health System, and went to work.

Here’s what Samaritan’s Purse accomplished, according to its website:

We operated our respiratory care unit in Central Park from April 1 to May 5. Through our  partnership with the Mount Sinai Health System, we treated more than 300 coronavirus patients in New York, including 190 at the park site.

More than 240 relief specialists served at various times on the Disaster Assistance Response Team there. We ran a similar medical facility outside of Milan, Italy, that opened on March 20 and closed May 7. The 14-tent unit was set up adjacent to the Cremona Hospital in order to treat an overflow of coronavirus patients.

Our DC-8 aircraft made two airlifts to Italy in order to deliver the hospital, 20 tons of supplies, and a large Disaster Assistance Response Team.

Those efforts sound not only peaceful and benign, but also quite remarkable. Not so, according to a number of New York City officials, who started a culture war where there wasn’t even a battle—except for those fighting for their lives due to COVID-19.

According to a May 4 New York Post column, “Four local Democratic members of Congress—Reps. Jerry Nadler, Carolyn Maloney, Adriano Espaillat, and [Alexandria Ocasio-Cortez]—sent a letter to Mount Sinai expressing their ‘concern’ about the group’s efforts and demanding to know how it had received permission to operate in Central Park.”

Combine that with Johnson’s tweets and you have yourself a culture war coup d’etat.

Johnson specifically called out the organization’s religious views, tweeting they were too exclusive and hateful:

Their continued presence here is an affront to our values of inclusion, and is painful for all New Yorkers who care deeply about the LGBTQ community. …

The @NYCCouncil is committed to supporting [health care workers] and protecting our city’s public health. But as a city that values diversity and compassion for all, we can’t continue allowing a group with their track record to remain here when we’re past the point they’re needed.

Mount Sinai must sever its relationship with Samaritan’s Purse. Its leader calls the LGBTQ community ‘detestable’ and ‘immoral.’ He says being gay is ‘an affront to God,’ and refers to gay Christians as ‘the enemy.’ …

Johnson concluded his tweetstorm:  “Hate has no place in our beautiful city.”

Samaritan’s Purse did indeed leave a few days later, although it’s unclear whether those tweets motivated it or whether it had already planned to leave New York City on May 5.

Johnson’s interpretation that Samaritan’s Purse is a bigoted, hateful organization because it espouses traditional Christian beliefs—specifically, that marriage is between a man and a woman—is not a new lens through which the left views Christians, though that doesn’t make it accurate.

Even before the Supreme Court legalized gay marriage in 2015, that was the premise of virtually every LGBTQ group, the plaintiff in that 2015 court case, the ACLU, and many others.

Since when is it “bigotry” to hold sincere religious beliefs that people have practiced for centuries?

The LGBTQ community claims to advocate tolerance and inclusion, but it is inviting and welcoming only when everyone believes what it does, even when, as we saw here, the issue at stake—medical care in a crisis—has nothing to do with political ideology.

There’s no evidence that Samaritan’s Purse came to New York City to condemn gay marriage or even to spread the Gospel. From the sound of it, Samaritan’s Purse pitched its tent, gave medical care to patients suffering with COVID-19, and after a few weeks, or perhaps when its presence became controversial, it left.

There is still a cultural divide between Christians and LGBTQ groups and their supporters. That’s unfortunate.

I know many Christians who grieve over that and desire harmony with everyone without compromising their beliefs. I’m sure many in the LGBTQ community do as well.

It’s possible that divide may always exist, but I wish that Christians could maintain their beliefs and still extend courtesy and grace, and that people like the New York City Council speaker would be as inclusive and tolerant as they claim to be toward Christians trying to help them.