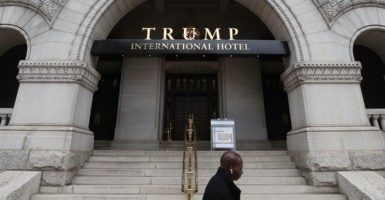 A group of foreign dignitaries walk into a hotel bar. They buy drinks, have dinner, and stay the night.

No, this isn’t the beginning of a bad joke.

Seriously: Do these bland acts violate the Constitution? According to a group of restaurateurs, 215 members of Congress, and the governments of the District of Columbia and Maryland, they do—if the name on the hotel is Trump.

Dusting off a constitutional provision that conjures images of a long-ago time filled with princes and potentates, those entities and individuals allege that President Donald Trump violates the Constitution’s Foreign Emoluments Clause (and some also say the Domestic Emoluments Clause) whenever foreign dignitaries patronize his properties.

What is an emolument? The dictionary definition simply says that it is “profit, salary, or fees from office or employment; compensation for services.”

The Foreign Emoluments Clause of the Constitution more specifically provides that:

No Title of Nobility shall be granted by the United States: And no Person holding any Office of Profit or Trust under them, shall, without the Consent of the Congress, accept of any present, Emolument, Office, or Title, of any kind whatever, from any King, Prince, or foreign State.

Makes sense. The Founders didn’t want American individuals to be unduly influenced by gifts or payments from foreign governments. Officials can accept them, but only with the prior consent of Congress.

Prior to these cases against Trump, the Foreign Emoluments Clause rarely has been litigated and mostly was discussed in advisory opinions from various federal agencies.

For example, could President Barack Obama accept the $1.4 million in cash that accompanied his 2009 Nobel Peace Prize, awarded by a committee selected by the Norwegian Parliament? The Justice Department’s Office of Legal Counsel said that Obama could and that he didn’t need prior congressional approval. That was the end of it.

Not so with Trump, though. So far, none of the courts to hear the emoluments cases against the president has ruled on the merits. The courts mostly have been concerned with procedural questions, such as whether the individuals bringing the suits have “standing” to do so, an issue that recently has cropped up in other high-profile cases.

That doesn’t make Thursday’s decision by the U.S. Court of Appeals for the 4th Circuit any less monumental.

In July 2019, a three-judge panel of the 4th Circuit ruled that the governments of D.C. and Maryland did not have standing to pursue their Emoluments Clause claims related to Trump’s D.C. hotel.

The en banc decision by the entire court Thursday—by a 9-6 vote—vacated the panel’s decision and will allow the case to proceed in the district court. The appeals court’s action includes two sharply worded dissenting opinions and a concurrence that seems to serve no other purpose than to personally attack the dissenting judges.

Although technically a narrow decision on procedural grounds, the majority opinion increases the odds that the Supreme Court will take up the issue (unless it becomes moot if, for instance, Trump loses his bid for reelection). In fact, Trump’s attorneys confirmed that they will ask the high court to do so.

As Judge J. Harvie Wilkinson, a 35-year veteran on the bench, laments in his dissent:

We are reaching the point of solving political differences increasingly through litigation rather than through legislation and elections. This is a profoundly anti-democratic development pressed in a suit whose wrongfulness and transparently political character will diminish the respect to which courts are entitled when they carry out the essential functions that our cherished Constitution has assigned them.

Unfortunately, the trend of trying to politicize the federal courts doesn’t look like it will end anytime soon, least of all with these cases.