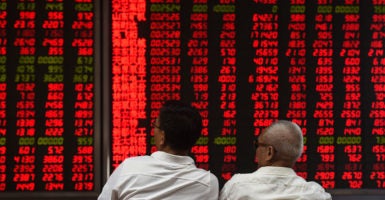 President Donald Trump will cut the federal government’s retirement fund investments in Chinese equities, according to a Monday letter obtained by Fox Business.

“This action would expose the retirement funds to significant and unnecessary economic risk,” O’Brien and Kudlow wrote in the letter, “and it would channel federal employees money to companies that present significant national security and humanitarian concerns because they operate in violation of U.S. sanction laws and assist the Chinese Government’s efforts to build its military and oppress religious minorities.”

“I want to thank President Trump for ensuring that our military personnel and other federal employees don’t subsidize the Chinese military,” Banks told The Daily Caller News Foundation in a statement. “I hope Congress can make this fix permanent by passing my bill, the Blocking Investment In Our Adversaries Act.”

The Indiana representative first drew attention to the matter in May when he introduced the Blocking Investment in Our Adversaries Act—a bill that seeks to prevent Thrift Savings Plan savings from being invested in either Chinese or Russian companies.

Banks warned of the looming coronavirus pandemic days before his fellow lawmakers began taking the virus seriously, he told The Daily Caller News Foundation in an early April interview.

If more lawmakers had focused their attention on China and China’s pattern of misinformation and propaganda, the United States might not have been impacted so heavily by the virus, according to Banks.

“It wouldn’t be a surprise to anyone who has been following China’s actions, their misinformation campaign, their propaganda, apparatus, and effort, that we would see many of the actions that we’ve seen come out of China,” Banks said in April.