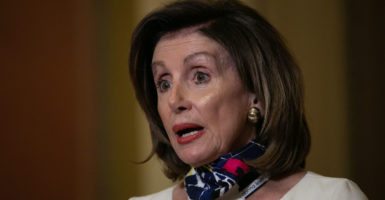 House Democrats have released a completely unserious proposal to respond to the public health and economic crisis the nation is confronting as a result of COVID-19.

Spanning more than 1,800 pages, the bill represents a partisan laundry list of mostly bad policies, calling for trillions of dollars of additional deficit spending on handouts and items unrelated to the crisis.

Lawmakers should focus on the task at hand and respond directly to the public health crisis and its related effects, not abuse these unprecedented circumstances to push through partisan priorities that would derail the recovery.

Lawmakers must work together to create the conditions to safely reopen America, removing barriers to working, creating, and trading, and to enable American society to rise up again and drive the economic recovery.

It’s one thing to provide short-term and targeted unemployment benefits during forced shutdowns, but providing a year’s worth of unprecedented additional unemployment benefits—up to an extra $31,200 per worker—would be devastating to our economy, potentially even threatening our ability to combat COVID-19 and Americans’ supply of essential goods and services.

Using taxpayer dollars to pay unemployed workers more than employed workers is incredibly unfair to the hardworking Americans who continue to work each day—and wholly un-American.

Policymakers should be focused on creating the conditions that enable the 1 in 5 Americans who have lost their jobs to reconnect with their previous employers or find new employment, instead of incentivizing them to remain unemployed until 2021.

The HEROES Act’s perverse unemployment benefits threaten the well-being of the workers they claim to want to help. Tantalizing workers with unemployment benefits equal to 150% or 200% of their usual earnings will only hurt them in the long run, by leading to long-term unemployment and to lower incomes and fewer opportunities, while slowing the American recovery.

Temporarily lifting the cap would provide a two-year windfall tax cut to the wealthiest taxpayers in the highest-tax states.

Before the 2017 reforms, high-tax states such as California, Connecticut, and New York were subsidized by other federal taxpayers across the country. In the case of high-income California taxpayers, the federal state and local tax deduction reduced their overall state tax bill by 40%.

If this proposed change to uncap the deduction were made permanent, it could encourage state governments to increase some of their most economically harmful individual taxes, slowing the economic recovery and passing the costs onto more responsible states.

3. Bailing out states and localities: The bill also includes more than $1 trillion in aid to state and local governments with the vast majority being unrestricted aid that does not directly respond to costs incurred in the fight against COVID-19.

Congress should not be sending blank checks to states and localities, which would only serve to bail out many states that are financially mismanaged and to prop up excessive levels of state and local government spending, and could set a dangerous precedent for the future.

Congress can avoid creating perverse incentives by relieving state governments of unfunded mandates and federal red tape that raise costs and reduce the effectiveness of state and local spending.

Providing blanket student loan forgiveness is neither targeted nor directly related to addressing COVID-19’s impact. It would merely add greater burdens on those who did not take out the loans (the vast majority of taxpayers, nearly two-thirds of whom do not hold bachelor’s degrees).

Congress has already suspended student loan payments and interest to meet the needs of borrowers who are struggling to make payments, providing temporary relief.

Although the USPS raised concerns about its short-term financial status in March, its most recent financial report explicitly states that it has enough funds on hand to maintain operations for at least the next year.

A bailout of the Postal Service is not warranted, and it would only maintain an unsustainable status quo. Further, the new legislation would allow the USPS to use the $10 billion CARES Act loan to repay old debts, rather than maintaining operations, which was the stated purpose of providing the loan in the first place.

Congress should free the Postal Service of governmental micromanagement, or at least reform it, rather than sinking tens of billions of additional taxpayer dollars into it.

American lives and livelihoods have been severely affected by COVID-19 and its related effects on the economy and society.

Controlling the spread of the disease, protecting the most vulnerable, and providing relief for those most affected by this crisis require an “all of society” approach that recognizes the strengths of civil society and America’s robust system of federalism.

The Heritage Foundation’s National Coronavirus Recovery Commission provides lawmakers and stakeholders at all levels of government and in civil society with actionable recommendations to protect both lives and livelihoods.

As America reemerges from this crisis, Congress should remove the most pressing barriers to economic activity, including those that unnecessarily increase costs, restrict access to crucial resources, and limit people’s ability to work.

Removing barriers to economic activity—not stimulating new spending or bailing out student loan borrowers, the Postal Service, or states and localities, while containing the coronavirus’ health threat—is key to getting America back to economic and public health.