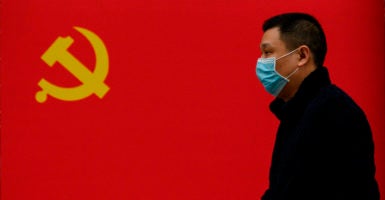 “The cover-up continued with the expulsion of media outlets and the proliferation of Chinese propaganda targeting the Western world,” the letter signed by the attorneys general says. Pictured: A man wearing a face mask as a preventive measure against the coronavirus walks past a Communist Party flag along a street in Wuhan in China's central Hubei province on March 31. (Photo: Noel Celis/AFP/Getty Images)

Eighteen Republican attorneys general called Friday for a congressional probe into China’s deliberate concealment of the severity of the coronavirus outbreak at its onset.

The attorneys general detailed China’s apparent efforts to have “intentionally misled the world over the last 6 months” in the letter.

“These layers of deceit began last year with the censoring of Chinese health officials and the muzzling of Taiwanese complaints,” the attorneys general wrote. “The cover-up continued with the expulsion of media outlets and the proliferation of Chinese propaganda targeting the Western world.”

“Congressional hearings are critical to our Nation’s understanding of the origins of COVID-19 and the efforts to deceive the international community,” the letter stated.

The attorneys general call for a congressional probe into China’s handling of the coronavirus outbreak came three weeks after Missouri Attorney General Eric Schmitt filed a lawsuit against the Chinese government for damages caused by its efforts to deceive the global community about the dangers of the virus.

Wisconsin Republican Sen. Ron Johnson, the chairman of the Senate Homeland Security and Governmental Affairs Committee, said in April his committee would conduct a wide-ranging probe into the coronavirus outbreak, including its origins in China and the World Health Organization’s response to the virus.

President Donald Trump said in late April that he’s seen evidence that strongly indicates the coronavirus originated from the Wuhan Institute of Virology. His comments about the lab came one day after the Office of the Director of National Intelligence confirmed that it’s examining whether the virus accidentally leaked from a lab in Wuhan.