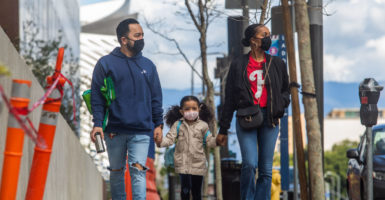 Families have taken the pandemic seriously, taking measured steps to follow Centers for Disease Control and Prevention guidelines, ready to hunker down and ride out the storm. Pictured: A family walks wearing masks in Los Angeles on March 22, 2020. (Photo: Apu Gomes/AFP/Getty Images)

Kimberly Fletcher is founder and president of Moms for America, an Englewood, Ohio-based nonprofit.

President Ronald Reagan in 1986 famously said the scariest words in the English language are “I’m from the government, and I’m here to help.” In the past decade, however, those words have been replaced with even scarier ones: “We have to do something.”

While the government is busy doing “something,” the families of America are being left with nothing, and despite what the media would have you believe, it’s not President Donald Trump, but rather a deceptive media who are to blame.

We all knew businesses would suffer and families would struggle simply because people were voluntarily staying home to “stop the spread” of the coronavirus, but the devastation inflicted on families and family businesses did not have to be this severe.

For the most part, families have taken the pandemic seriously, taking measured steps to follow Centers for Disease Control and Prevention guidelines, ready to hunker down and ride out the storm. However, in recent weeks, moms’ concerns have evolved from “Should I buy a mask?” to “Can I pay the rent?”

As the president of a national organization of moms, I can tell you the mothers of America are much more fearful of the government response to this pandemic than the pandemic itself.

Bullying and fearmongering by irresponsible, deceptive, agenda-driven media have led to draconian measures completely unnecessary to stop or even slow the spread of the coronavirus.

It almost makes one’s head explode to hear the media feign concern for “the American people” when they had no interest, and even marginalized, the virus for the entire month of January and well into February.

Why did they do that? Because they were focused on their impeachment talking points and had no intention of talking about anything else.

While the Democrats were playing their political impeachment games and the media were downplaying the coronavirus, Trump was taking decisive action, shutting down travel from China.

Scientists around the world study these viruses all year, every year to collect the best information to monitor and control outbreaks like this one. The CDC gleans from the results of that research to alert leaders of governments to potential threats.

It is that information that Trump used to determine the best means to address the threat, which changed hour by hour, going above and beyond within his constitutional authority.

Once the media realized impeachment was going nowhere, they latched onto their new political weapon, COVID-19, inciting mass hysteria and accusing anyone and everyone who didn’t cow to their hysteria as being either ignorant or wanting old people to die.

That irresponsible behavior is not only reprehensible, it’s extremely dangerous. Businesses are being bullied into closing their doors unnecessarily, putting hundreds of thousands of mothers and fathers out of work.

When the president declared a national state of emergency, the American people responded, and the private sector rocked it. Based on the information we received, we were willing to do what was requested for the health of our families and neighbors.

Moms rose to the crisis, becoming homeschoolers overnight, scrambling to make sure they had food in the pantry and gas in the car, and rearranging furniture to carve out space for their new “home office.”

Seemingly overnight, the CDC-recommended signs, tape lines, and plastic shields were mounted and displayed in stores and businesses across the country. Store hours were reduced, schools were closed, and hospitals and medical facilities geared up to put their years of training to the test.

Nonprofit organizations, companies, and websites created virtual support centers, offering free online resources on everything from schooling at home to home storage. Even entertainers, led by actor John Krasinski, made an inspiring appearance, showing the best side of Hollywood—something we’ve sorely missed in the past few decades.

The American people rose to the occasion with class and courage like never before. “We’re in this together” became the unifying theme among families, businesses, and government agencies—until, suddenly, we weren’t.

We were told repeatedly the reason for the “safety measures” was to slow the spread of the virus and “flatten the curve” so our medical system wouldn’t be overwhelmed. So, we’re having a hard time understanding what drive-in church restrictions, purchase limitations, or mandatory lockdowns have to do with stopping the spread of COVID-19 or preserving our medical infrastructure.

When you see a father handcuffed and arrested for playing with his 6-year-old daughter in a park alone or a man dragged off a bus by a dozen police officers for not wearing a mask, you know we have a problem. When hundreds of businesses are permanently closing their doors, and mothers are taking to Facebook to plead for a modicum of commonsense, you know we have a problem.

Right now, the biggest crisis in our country isn’t the virus; it’s government “controllers” using the pandemic to seize power we never gave them and big-government cheerleaders in the media instigating it.

If there was only one word to define government, that word would be “force.” That’s exactly what we’re seeing when governors and mayors are using police officers to force people into submission, subjected to their draconian mandates that have little or nothing to do with public health or supporting the medical infrastructure.

Most of us are still scratching our heads, wondering how “30 Days to Slow the Spread” turned into $500 fines for sitting in our car or governors telling us what we’re “allowed” to buy at the store.

Putting our police officers in the position of enforcing these draconian mandates is not only unconstitutional, but also very dangerous. Turning public servants into a brute squad at the whim of a politician puts our police officers at great risk, creating distrust among the very people they are appointed to serve.

Our nation is moving more and more toward a police state, and it’s our police officers and their families who will pay the ultimate price for it. It’s hard to “thank a cop” when they’re handcuffing you in front of your 6-year-old daughter for playing ball in a park.

For the first time in decades, moms are realizing what freedom is and just how close we are to losing it. History has proven freedoms lost are rarely, if ever, regained and that power seized by government is never surrendered.

We are at a crossroads in our country like we’ve never seen before. The American people and the private sector rose to the crisis. It’s what we did that dramatically slowed this virus, what we willingly chose to do based on the information we were given.

Ultimately, it will not be the government, politicians, or the media that decide where we go from here. It will be American families. Let us hope we choose freedom. If we don’t, nothing we gain will be worth the loss.