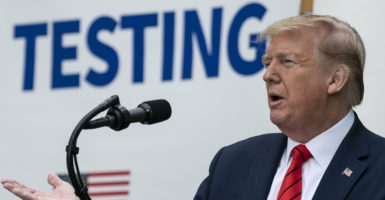 "This week, the United States will pass 10 million tests conducted, nearly double the number of any other country," President Donald Trump says during a press briefing Monday in the Rose Garden. (Photo: Drew Angerer/Getty Images)

As the United States is about to pass the milestone of doing 10 million tests for the coronavirus, the White House announced an $11 billion aid package to help states boost testing.

“This will give them the resources to partner, as they have, with the federal government … and to achieve their testing goals,” Adm. Brett Giroir, assistant secretary for health at the Department of Health and Human Services, said Monday during a Rose Garden press conference.

But strings will be attached to the new aid for states to fight COVID-19, the disease caused by the coronavirus, the admiral said.

HHS will offer a large contract to ensure that underserved racial and ethnic minorities “are linked to the services they need, not only in testing but in care as well,” Giroir added.

President Donald Trump stressed that testing for COVID-19 has doubled in less than a month, citing the Food and Drug Administration.

“The FDA has authorized more than 92 different [kinds of] tests and over 9 million have been performed here in the United States. Three weeks ago, we were conducting nearly 150,000 tests per day,” Trump said. “Now, we are doing approximately 300,000 tests per day, a 100% increase, and it will go up substantially from that number.”

This week, the United States will pass 10 million tests conducted, nearly double the number of any other country. We are testing more people per capita than South Korea, the United Kingdom, France, Japan, Sweden, Finland, and many other countries, and in some cases combined.

On Friday, the FDA authorized the coronavirus antigen tests, an alternative testing technology that can be much more readily manufactured.

On ramping up testing, which his detractors say came too slowly, Trump said: “We have met the moment and we have prevailed.”

Trump noted that the U.S. and Germany have the lowest number of deaths per capita from COVID-19 of any country.

Addressing the news that a White House aide was diagnosed last week with the coronavirus, Trump said the system did not “break down,” as a reporter put it.

“We have a lot of people in the White House, and we had one person [who tested positive],” the president said, adding:

Many of those people, most of those people are tested, depending on what portion of the Oval Office area they are in. Everyone coming into the president’s office gets tested. I felt no vulnerability whatsoever.

Trump again wasn’t wearing a mask during the press conference, but he noted that the White House staff does so now.

When asked if he gave the order for masks, the president replied: “Yes, I did. I required it.”

Trump abruptly ended the press conference when two reporters in a row appeared to chide him, one saying that he was talking abut testing as if it were “a competition” with other nations.