One Botched CARES Act Bailout for Airports Is More Than Enough 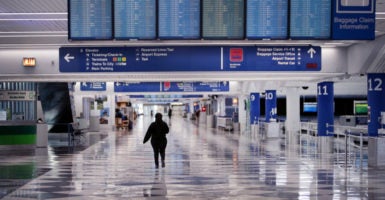 A worker walks through a baggage claim area at a nearly-empty O'Hare International Airport on April 2, 2020, in Chicago. The airport, which typically serves 8.2 million passengers a month, has closed two of its seven runways as the COVID-19 pandemic has significantly reduced air travel. (Photo: Scott Olson/Getty Images)

The CARES Act, signed by President Donald Trump into law in late March, was intended to stabilize the nation in the wake of economic shutdowns related to the COVID-19 pandemic.

Instead of being focused on straightforward pandemic relief to provide timely, targeted, and temporary support, it included many other policies—some with disastrous results.

A classic example of Washington dysfunction only came to light after the bill passed. While providing $10 billion in grants to the nation’s airports, Congress produced a convoluted formula that gave an unintended taxpayer-funded windfall to some tiny airports.

Now, airports are asking for at least $10 billion more. Congress should not indulge them.

In the case of airports, the bailout is buried deep in the CARES Act text. Busy airports received the largest shares of a $3.7 billion pot, based on passenger volume, which is straightforward.

Things fell apart badly with the next pot of taxpayer money.

An additional $3.7 billion was allocated to airports based on a complicated formula that involved debt service (interest payments) and the size of debt service payments compared with the airport’s financial reserves.

Many of the nation’s busiest airports have ongoing expansion and improvement projects. Those projects are often expensive, and airports typically borrow necessary funds in advance. In contrast, many small and remote airports do not need to expand and thus have no debt.

For a debt-free airport, the CARES Act funding formula would require dividing by zero, which is mathematically impossible. The Federal Aviation Administration inputted dummy values to avoid giving any airport an infinite amount of money. However, that was insufficient to fix the botched formula.

As a result, when the FAA announced the initial amounts being given to each airport, it became apparent that some airports had hit the jackpot for reasons that have nothing whatsoever to do with COVID-19.

While large airports typically received an amount sufficient to cover a few months of operations, some small airports got enough to cover several years. Stories about this phenomenon popped up around the country, including:

The FAA later clarified that airports are essentially limited to a maximum of four years of qualified expenses, since the funds expire after four years.

Still, that’s an absurd amount of money to give an airport in response to the temporary COVID-19 lockdown.

The Senate Commerce, Science, and Transportation Committee held a hearing on Wednesday to discuss the aviation industry. At the hearing, the CEO of the American Association of Airport Executives requested a second bailout for airports, largely based on projections of long-term reductions in consumer demand.

Congress has already given the aviation industry an array of special bailouts this year. If the public decides to fly less over the next few years, airports should adjust by focusing on cutting costs, rather than looking for repeated taxpayer bailouts.

This debacle is also a prime example of what’s wrong with massive, hastily constructed, “must pass” legislative packages.

The CARES Act is 335 pages long and cost $1.8 trillion, and the final text was not available until the day the Senate voted on it. Even when the House voted on final passage two days later, the implications of provisions such as the airport funding formula were unclear.

While many of the CARES Act provisions were necessary and helpful, the bill fell victim to the congressional “Christmas tree” phenomenon, where elected officials cram “presents” to specific groups inside big legislative packages.

A team of experts at The Heritage Foundation has provided Congress a detailed report offering a variety of fixes to flaws in the CARES Act. Those solutions would help the nation respond to, and recover from, the pandemic.

Meanwhile, the mere fact that Congress and the FAA have authorized financial windfalls for some airports is not a justification for those lucky airports to take advantage of the situation.

Small airports might be eligible for up to four years of expenses as a result of the botched CARES Act formula, but they should return any amount in excess of COVID-19 shutdown losses to the federal government.

We have seen such responsible behavior elsewhere. Businesses including hotels and sports franchises have decided to do the right thing and return money they received from the Paycheck Protection Program that they did not truly need.

With the national debt increasing by hundreds of billions of dollars per week, Americans have an obligation not to make things worse by grabbing as much “free” money as possible from Uncle Sam.

No one, including airports, should be getting fat off pandemic relief funds.