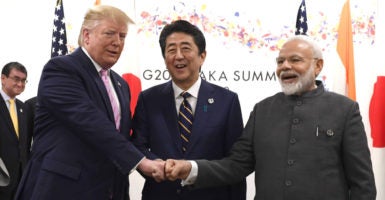 The Quad, which includes Australia, Japan, India, and the U.S., represents a quarter of the world’s population and also a little more than a quarter of the world’s economic activity. Pictured: President Donald Trump does a fist bump with Japanese Prime Minister Shinzo Abe and Indian Prime Minister Narendra Modi during a trilateral meeting on the first day of the G-20 summit June 28, 2019, in Osaka, Japan. (Photo: Carl Court/Getty Images)

The Quadrilateral Security Dialogue, comprising the U.S., Australia, Japan, and India, was born out of the response to the 2004 Indian Ocean tsunami.

The dialogues were suspended in 2008, but since the Trump administration resurrected them in 2017, they have assumed much greater strategic significance vis-a-vis China.

Now it’s time for the “Quad” to assemble against a new threat; namely, COVID-19 and the 2020 global recession.

Quad members, working domestically and together, empowering economic freedom for businesses and people, will be essential for a quick economic recovery.

The National Coronavirus Recovery Commission convened by The Heritage Foundation has already identified U.S. leadership in economic freedom as one of the key pillars for getting the U.S. back to work.

Making sure economic freedom is a part of the recovery will be essential among the other Quad members as well.

A quick recovery for the Quad will be no small accomplishment, however.

Trade between the Quad economies topped $440 billion in 2018, while the Quad traded almost $6 trillion with the rest of the world.

According to The Heritage Foundation’s 2020 Index of Economic Freedom, only 3 of the 4 Quad economies are above the world average for economic freedom.

Australia has the fourth-freest economy in the world. With an overall score of 82.6 out of 100, Australia is considered a free economy.

With overall scores of 76.6 and 73.3, respectively, the U.S. and Japan are both considered mostly free economies.

But India, with an overall score of 56.5, is considered a mostly unfree economy.

Unless the Quad economies can focus on structural reforms focused on economic freedom as they strive to get their economies back to work, they can expect a struggle to get back to just average economic growth—and even that will not be enough to truly recover.

Working together, however, they can better find the strength to do what’s necessary to get their economies moving again.