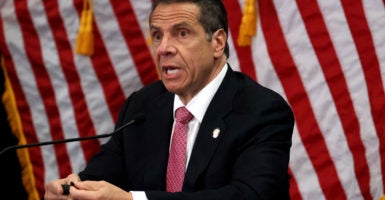 New York officials who have asked Congress to provide more federal funds to alleviate the economic fallout of the COVID-19 pandemic should make better use of existing resources and reevaluate their decisions, according to an analysis of a $500 billion “bailout” proposed by the National Governors Association.

New York Gov. Andrew Cuomo and New York City Mayor Bill de Blasio, both Democrats, have expressed displeasure with President Donald Trump’s comments on Twitter and in media interviews when asked about the appropriateness of all U.S. taxpayers’ bailing out states that aren’t well run.

“Washington has no need to fund New York’s wasteful ways,” was how a New York Post headline summarized an analysis of Cuomo’s demands by E.J. McMahon, research director at the Albany-based Empire Center for Public Policy.

“If I was a governor of another state right now, I’d wish Cuomo would be quiet and go away, because the more it’s about him in New York, the less it’s about the actual issue,” McMahon said in a phone interview with The Daily Signal, adding:

Cuomo is sucking up all the oxygen talking about his problems. But behind his request for $500 billion—which is preposterous and just part of an old-fashioned haggle, to ask high—there is a serious issue that his bombast is masking. This has been an extremely disruptive period for government at all levels, and I’m not talking about the coronavirus and the health care costs. I’m talking about the impact of the economic shutdown on state revenues.

New York state has experienced 25,623 deaths from COVID-19, by far the most in the nation, and logged 54,597 recoveries, according to Johns Hopkins University’s tracker.

Trump told The New York Post that it was “not fair” for other taxpayers to be forced to bail out blue states such as New York that have been “mismanaged” by liberals over an extended period.

“Why should the people and taxpayers of America be bailing out poorly run states and cities, in all cases Democrat run and managed, when most of the other states are not looking for bailout help?” Trump tweeted April 27. “I am open to discussing anything, but just asking?”

Trump’s public comments on Twitter and to reporters followed on the heels of remarks by Senate Majority Leader Mitch McConnell, R-Ky., who said during a radio program April 22 that states in financial difficulty should consider declaring bankruptcy.

Cuomo described McConnell’s remarks as “un-American and uncharitable,” while de Blasio said they were inhumane.

But contrary to what New York political figures suggest, Adam Michel, a tax and budget policy analyst for The Heritage Foundation, concludes that the federal response “has been extraordinary” to COVID-19, the disease caused by the new coronavirus.

“In less than a month, Congress passed three bills, increasing spending and decreasing revenues by well over $2.5 trillion,” Michel says in a commentary. “President Donald Trump declared a national emergency, making about $50 billion in federal financial assistance available for states, localities, and territories. And the Federal Reserve took significant new actions, including buying short-term municipal debt for the first time (a dangerous precedent).”

Up until now, federal relief has been in the form of direct assistance to individuals and businesses that find themselves in a compromised position because of  the new coronavirus through “no fault of their own,” Michel writes.

But he warns that state and local government officials are lobbying for “unfettered access” to federal funds that would “encourage haphazard decisions” leaving states and taxpayers in even worse financial shape over the long run.

The CARES Act passed last month by Congress “contained zero funding” to offset shortfalls in state revenues resulting from COVID-19, according to the National Governors Association.

“We must be allowed to use any state stabilization funds for replacement of lost revenue, and these funds should not be tied to only COVID-19 related expenses,” Maryland Gov. Larry Hogan, a Republican who chairs the association, and Cuomo, the association’s vice chairman, said in a joint statement. “Congress must amend the CARES Act to allow this flexibility for existing federal funding.”

Cuomo and Hogan called for hundreds of billions of dollars in additional aid from the federal government:

Congress must appropriate an additional $500 billion specifically for all states and territories to meet the states’ budgetary shortfalls that have resulted from this unprecedented public health crisis. This critical stabilization funding for states must be separate from much-needed fiscal stabilization for local governments.

The Empire Center for Public Policy’s McMahon said he favors a “clawback provision” that most likely would be operative in states such as New York that don’t have right-to-work laws, where government agencies must negotiate collective bargaining agreements with public employee unions.

This clawback provision would make it clear that any additional federal relief for local and state governments cannot be used to increase the base pay of public employees, he said.

“There’s a misconception on the part of some conservatives that it is all about bailing out public pension funds,” McMahon said. “Different states have different problems. New York has one of the best-funded pensions, and Cuomo is not looking to bail out his pension funds. But he does have a hole in his budget.”

New York state’s budget is “not an austerity budget and actually included a spending increase,” McMahon said. “He passed an unbalanced budget that was billions of dollars short of what was needed.”

With an eye toward history, Heritage’s Michel cites examples where federal bailouts of state budgets during emergencies lead to increased state spending and more debt.

“In 2003, states got $20 billion in federal aid, but instead of this infusion acting as a temporary buffer to get states back in the black, state debts increased by 20%, total spending rose by 33%, and states shorted their pension contributions over the following four to five years,” Michel writes.

If Congress yields to the demands of New York and other states to provide $500 billion more without any provisos, Michel anticipates, it would set a “dangerous precedent for even larger future bailouts.”

Since states already received “an unprecedented amount of federal funding” to address COVID-19, Rachel Greszler, a research fellow at The Heritage Foundation, argues that states should enact needed reforms to their pension systems instead of devising new ways to spend more money from the federal government.

Greszler, who specializes in economics, budgets, and entitlements, wrote in an April 20 commentary for The Daily Signal:

COVID-19 measures have been in place now for about five weeks, but states’ unfunded pension systems—the driving force behind states’ fiscal woes—are closer to five decades in the making. Across the U.S., state and local governments have promised at least $5 trillion more in pension and other post-employment benefits than they’ve set aside to pay.

Greszler cites examples of funding Congress already provided to states in recent weeks—including $150 billion in direct grants for costs related to COVID-19 and $500 billion in short-term loans to municipal governments—to drive home the point that states have sufficient funds for the current crisis.

“The problem with using federal tax dollars to fund state and local governments is that it encourages fiscal recklessness and causes states to become dependent on the federal government,” she writes. “COVID-19 is a public health crisis, not a pretext for states to request funding for things that are their own responsibility.”

McMahon’s latest research, available here, makes the case against U.S. taxpayers being put into the position where they are financing pay increases for public employees.

However, McMahon said he does see a need for a carefully crafted relief package that addresses the economic impact of the nationwide shutdown, independent of the health care costs associated with the coronavirus.

This article has been corrected to reflect that “Washington has no need to fund New York’s wasteful ways” was a New York Post headline.