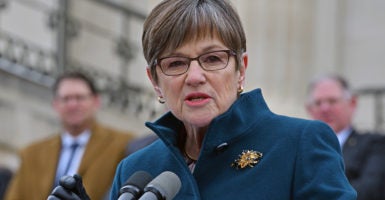 Kansas Gov. Laura Kelly signed a series of executive orders restricting public and private activities due to the COVID-19 crisis. The orders exempted 26 types of secular activities and facilities, but expressly excluded religious institutions from any such accommodation. (Photo: Mark Reinstein/Corbis/Getty Images)

A federal district court judge has taught Kansas Gov. Laura Kelly (a Democrat) a valuable lesson: The COVID-19 pandemic does not give her the right to suspend the First Amendment right of Kansans to practice their religious beliefs. Several other state and local officials should take heed, too.

Kelly signed a series of executive orders restricting public and private activities due to the COVID-19 crisis. On April 7, she issued Executive Order 20-18, prohibiting “mass gatherings” of more than 10 people in a confined or enclosed space. Violators were subject to up to a year in prison, a $2,500 fine, or both.

Yet Kelly expressly excluded religious institutions from any such accommodation. Churches, synagogues, and mosques were categorically barred from meeting inside their dwellings.

If 50 people sit in a room to talk about real estate deals, no problem. But if someone brings up John the Baptist, call the cops!

On behalf of two churches and their pastors, the Alliance Defending Freedom promptly sued the governor over this blatantly discriminatory policy.

Its court filing noted that an earlier executive order did have an exemption for religious gatherings, as long as attendees followed the appropriate social distancing rules, because “religious or faith-based services or activities” were considered an “essential function.”

On April 18, federal Judge John Broomes issued a temporary restraining order against Kelly, finding that the churches were likely to prevail on their claim that her order violated the First Amendment rights of their parishioners “to freely exercise their religion, including their right to attend worship services in their respective church facilities.”

He brushed aside Kelly’s claim that her executive order treated religious institutions no differently than “a large swath of both secular and non-secular behavior,” noting that the order expressly targeted churches to “restrict religious activity.” Further, the judge observed, religious gatherings present no “unique health risks” that could justify such discriminatory treatment.

Kelly also tried to justify her actions by citing a 1905 U.S. Supreme Court decision, Jacobson v. Massachusetts, which involved a state law mandating smallpox vaccinations in the midst of a smallpox epidemic. But Broomes explained that “even in such extreme cases as a public health crisis, the police power of the state is not without limits.”

Broomes’ order allowed the churches to meet as long as they followed safety protocols they had voluntarily agreed to. These included making sure their facilities were deep-cleaned before and after any in-person services, social distancing, and having hand sanitizer available for use on-site.

While the two churches were out from under the governor’s order, Kelly initially vowed to continue to apply her restrictions to “all other religious gatherings.” However, she may have since gotten a little religion herself. There are now reports that she will issue another executive order that will eliminate her discriminatory restrictions on religious institutions.

It acknowledged that, in order to stop the spread of a deadly disease, it had been necessary to impose “extraordinary restrictions on all of our daily lives.” But, Barr added, that does not mean that states can impose unreasonable restrictions “violating the constitutional rights and civil liberties of individual citizens.”

He specifically noted that “the First Amendment and federal statutory law prohibit discrimination against religious institutions and religious believers,” and warned that the Justice Department would go after state and local governments that cross the line and go from “an appropriate exercise of authority to stop the spread of COVID 19 into an overbearing infringement of constitutional and statutory protections.”

Officials such as Kelly are on notice that the Justice Department is now paying attention to what they are doing and may take action. The same goes for other public officials, such as Louisville, Kentucky, Mayor Greg Fischer (another Democrat), who tried to prohibit drive-in services on Easter Sunday.

Fischer was stopped by federal Judge Justin R. Walker, who said, “On Holy Thursday, an American mayor criminalized the communal celebration of Easter. That sentence is one that this Court never expected to see outside the pages of a dystopian novel, or perhaps the pages of The Onion.”

Some state and local officials are keen to impose unnecessary and unconstitutional restrictions on congregations who wish to gather together in a safe and responsible manner. That’s as dystopian as it gets. The U.S. Justice Department should do everything it can to preserve our First Amendment rights.