Pelosi Touts a Universal Basic Income. Here’s Why It Would Be Bad for America. 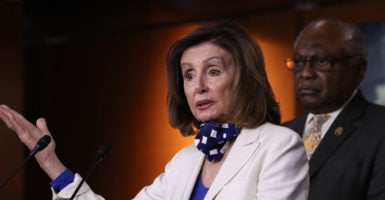 Progressives are eager not to let a “crisis go to waste” and are now aggressively pushing some ideas, amid the COVID-19 pandemic, that would be rejected in less desperate times.

On April 27, House Speaker Nancy Pelosi suggested that it might be time for America to implement some kind of basic minimum income.

“Let’s see what works, what is operational, and what needs attention,” Pelosi, D-Calif., said in an interview with MSNBC, adding:

Others have suggested a minimum income, a guaranteed income for people. Is that worthy of attention now?

The idea of a universal basic income, or UBI, has been around for decades, and most recently was touted this year by then-Democratic presidential candidate Andrew Yang, who has renewed calls for its implementation.

Others have expressed recent support for the idea as well, including Pope Francis, who said it could be a way for countries to help the countless people who have lost their jobs.

Some countries are already moving in that direction. Spain is starting to roll out a nationwide universal basic income in response to the coronavirus pandemic and the economic devastation left in its wake.

But it’s unlikely to be a temporary measure, if one public official there has anything to say about it.

Nadia Calvino, Spain’s minister of economic affairs and deputy prime minister, said that her government hopes that the universal basic income is something that “stays forever, that becomes a structural instrument, a permanent instrument.”

As well-meaning as some of these proposals may be—or as attractive as they might seem as an alternative to other forms of welfare—universal basic income hasn’t taken off where it’s been tried and ultimately ends up being anti-work.

Finland launched a basic income program in 2017, handing out the equivalent of about $700 a month to a random group of 2,000 recipients.

Finnish taxpayers got fed up with simply giving people money, especially because it meant that they would get slapped with a sizable tax increase.

A study by the Organization for Economic Cooperation and Development even suggested that the program would raise, rather than reduce, poverty rates.

One way or another, it was hardly a panacea to alleviate the problems of poverty and unemployment, and the Finnish program ended after just a year.

There were earlier efforts to enact a basic income in the United States in the 1970s. However, a study found that “for each $1,000 in added benefits, there was an average $660 reduction in earnings, meaning that $3,000 in government benefits was required for a net increase of $1,000 in family income.”

At the very least, it seems that a universal basic income lessens the incentive to work. What would happen if such a system became integrated into U.S. policy on a permanent basis?

Creating incentives for people to work less, as with the recent round of federal unemployment insurance benefits that is disincentivizing employment for many Americans, might seem necessary in a time of emergency, given the staggering job losses the country faces.

But making it a long-term solution to our problems could quickly create a malignant cycle of dependency, as fewer Americans work and everyone else is left to pick up an ever-expanding taxpayer tab.

Such a system might function for a little while, but it would ultimately erode and further diminish our free society.

America and other countries around the globe face a unique set of health and economic challenges right now. Those challenges will undoubtedly spur some rethinking about policies that may need to be changed to adapt to a changing world.

One thing that doesn’t change, however, is human nature.

A system that incentivizes Americans to work less and become more dependent on government largesse is unlikely to make poverty a thing of the past and more likely to erode the prosperity that’s been the hallmark of the most productive people in world history.